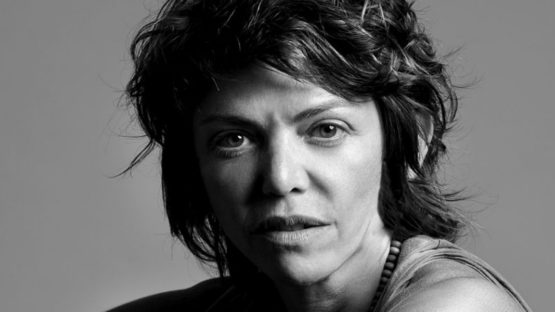 It’s not easy to be different in today’s world of so many similarities and copied ideas, but Miriam Cabbesa certainly stands out among her colleagues painters for her distinctive approach that excludes the use of basic painting instrument – the brush. Instead of it, she engages her fingers, hands and sometimes entire body to transfer the paint onto her monumental canvases. Her method, known as meditative “slow action painting” often includes various objects too, like combs, squeegees and keffiyeh and tallit headdress. Using the repeating, choreographed movements, the artist creates abstract, symmetrical forms and mostly monochromatic compositions in accordance with the tendency to reduced palette, most recently enriched with gold.

Cabessa was born in Morocco but raised in Israel where she gained her education. First attending Cultural Studies at Camera Obscura School for the arts in Tel Aviv, she later finished Ha’Midrasha College of Art in Ramat HaSharon and Kalisher College of Art, Tel Aviv. Her great breakthrough on the international artistic scene occurred in 1997 when she represented Israel at the Venice Biennale. The artist became known for her distinctive method of applying paint onto the canvas with the use of her body and various objects instead of brushes. Creating imagery that ranges from organic to mechanistic, her compositions are the result of her repeating gestures. The limited palette is reduced mostly on black and white with a rare implementation of matt hues of red, yellow or purple. Dragging her hands and various other objects across the canvas, she creates paintings made up of thousands of tiny lines. Observed up close, details could be interpreted as grooves in a vinyl record or the lines of a heart monitor, but a few steps away, the negative and positive images resemble the X-ray snapshots, the sepia photographs, or maybe the panoramic view of the Rocky Mountain. There lies the true excitement for the viewer whose perception and imagination are challenged all the time.

As the recipient of the numerous awards such as Arts Prize for Young Artists in Israel (1995) and the prize from the American-Israeli Cultural Foundation (1994 and 1995), Cabessa for the first time exhibited solo in Tel Aviv in 1994 and after which her work became a part of the collections of The Israel Museum, Jerusalem, The Tel Aviv Museum of Art, the Haifa Museum of Modern Art, The National Museum of Women in the Arts, Washington, D.C. and Texas State University. The artist performed Variation with Hands, with music by Jonathan Sheffer, at the Tel Aviv Museum of Art (2012), exhibited at Nye+Brown Gallery in Los Angeles (2012), and had a solo show at Julie M. Gallery in Tel Aviv (2014). She has also shown at the Morris Museum, Herzilya Museum of Contemporary Art, Israel, The Israel Museum, Ben-Ari Museum of Contemporary Art, Israel, the Jewish Museum of Pittsburgh, and the Kresge Art Museum.

Featured image: Miriam Cabessa – Artist’s portrait – Image via alchetron.com
All other images copyright of the artist