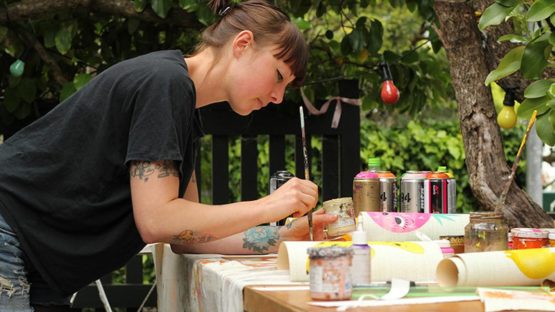 Misery  is one New Zealand’s most internationally recognized female artists, renowned  for her characters and graffiti/ street art whose  characters are cheeky, whimsical, cute and always dark. Misery fused childlike wonder and the macabre together in a way that captivated fans worldwide.

Tanja Jade Thompson was born in Maryborough, Australia. Her fascination with unique characters started at just three when she fantasized about marrying Boy George and fighting crime with Astro Boy. She is one of many creative women in her family, spanning four generations – her mother being a costume designer, both grandmothers were painters and great grandmother a commercial artist for the Auckland Civic Theatre; so, it’s no surprise her work now graces the streets and galleries of Auckland City and the world.

Misery’s Chinese Tahitian grandmother meme, fostered Tanja’s artistic talent teaching her to master a perfect coconut tree. Her meme is also credited with inspiring Tanja’s intense passion for Pacific and Asian art during their time together and on trips to Tahiti, which is still evident in her work today. These influences, along with an ongoing love for obscure Japanese cartoon characters, a fascination with cults, shines and gods, and fantasies of all things magical and whimsical soon collided in her imagination and her unique characters began to evolve.

In Misery’s teens her mother had the genius to enroll her in Metropolitan College, a school with an emphasis on art. Here she cultivated and defined her distinct characters, portraying a certain darkness and vulnerability drawn from her own emotions, life and dreams. They would later epitomize her name; Misery, a name gifted by fellow artist Askew. However, over time the depth of the darkness and vulnerability of her work began to consume her. External influences continued to cast further shadows which led Tanja to a ceremonial burial for Misery. RIP Misery, if only for a few years.

As time passed so did the darkness. She was inspired and invigorated by art projects working with vulnerable children abroad, travelled renewing her love of Asia, found true love, a love built on magical vegetables and ironically sealed by marriage in a vegetable patch. The time had now come to resurrect Misery into a new more fantastical Technicolor Miseryland, filled with mystical creatures.

Miseryland (Mis*er*y*land) n. 1. The mind and imagination of Tanja Jade 2. Where Misery lives

It’s more playful in Miseryland now, more humorous, naturally there are a lot of vegetables and it has an effervescence we’ve not seen there before. Her characters retain their distinction, still with a pinch of twisted quirky dark humor. Yet, there is little doubt the cloud has lifted and Misery is the happiest she’s ever been in Miseryland, surrounded by an eclectic mix of new friends which now collide in Tanja’s imagination.

Misery is no longer limited to just walls and paper, her work can be seen on vegetables, computer screens, within environments, on sets, collaborations with other artists, practical products and gracing classroom walls for refugee children in rural Thailand. Misery is now renowned worldwide for her characters and graffiti/ street art, and has gone on to achieve mainstream success including representation with New Zealand’s premiere art auction house Webbs, and exhibitions in all corners of the globe including Berlin, Taiwan, Melbourne, Paris and Los Angeles. Misery’s recognition has attracted endless media attention, including a half hour award-winning documentary produced by Sticky Pictures.

She lives in NZ.