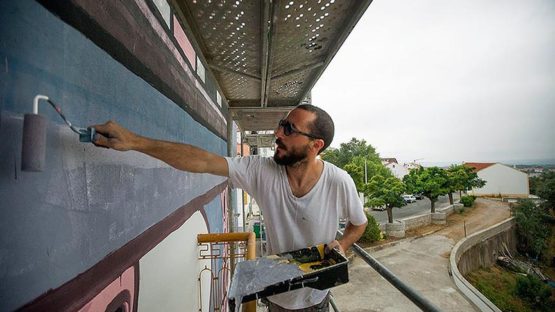 Mr. Thoms aka Diego della Posta, an Italian street artist. Mr.Thoms works with vibrant colors and geometric shapes to create movement. The walls he works on have a direct influence on his theme. His great understanding of architecture and body language allow him to grasp the essence of his characters and transcribe it to the walls. His characters appear directed by insanity. They have a funky sparkle in their eyes. His cartoonish portraits will make you want to stand up in move. This is what defines Mr.Thoms skills, his ability to depict movement onto the walls. You can feel the dog breathing, hear the musician playing and smell the alien’s paint.

He began his art story in 1996. and one of his first artworks were, as he recalls it: ” I had a spray of blue and drew the letter J with a crown above.” He finds his inspiration in different kinds of mediums and most versatile content, books, comics, films, cartoons etc. but for him the strongest influence yet are the surrealist painters. As he says, light bulb sparks often when he’s walking down the street, talking his trusty dog  Kijo for a walk, or/and converse with other people. Reading are also one of that inspiring moments.

Mr. Thoms was born in Rome in 1979, where he studied graphic design and painting at the Academy of Fine Arts.
Since 2000 he has worked as a production designer for movies and the theater, and also as an illustrator of animations for movies and television. Recently he has worked on the sets of the Olympic ceremonies held in Sochi, Russia.

He doesn’t want to constrain his style to some particular category, because, in the first place, he believes that defining the style means the death of creativity and if he ever reach that point, it’ll mean he doesn’t have anything else to say. “I dare to say that research is my style” he says.

Being a multifaceted artist who works with different types of medium he does prefer one above all others. In his own words: “Although I often find yourself working with a graphics tablet computer as a matter of practicality and timing, my favorite remains the paper support, find them on the enjoyment of the sign affects matter, that’s where it all started and it I will always want to return.” His art is present in the international gallery and museum circuits; he has participated to Writing and Street Art Festivals, and has done walls in Italy, Denmark, California, Portugal and Spain.