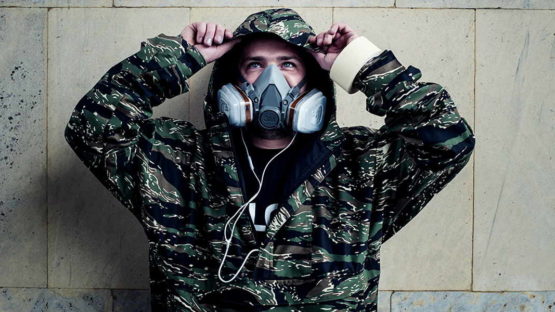 NAWER is a Polish Architect, designer and street artist. He earned his degree in Architecture and Urbanism at the University of Technology in Cracow and has been involved in street art culture for almost 25 years. His unique and prolific artistic aesthetics are born from the urge to reunite architecture and fine arts.

In his highly geometrical approach, NAWER creates images that are not only influenced by the architecture in which they are situated, but also reflect a vision for urban structures.  When he paints in situ, his work intrigues with its site specify, his work on canvas is dominated by almost mathematically derived visual satisfaction.

He created Artde7 Studio in 2006, with a focus on interior and graphic design, along with scenography. Creativity stems toward isometric graphics as extant of public and functional spaces. Interior spatiality is described as a blend of objects within space, while painting by perspective and axonometry using aerosol as a main medium. The combination of these two approaches allows a fresh take on the design of arrangement and creativity of an interior space. As his style evolves, the goal is to always strive forward in an effort to connect painting with architecture.

He has been part of many solo and group shows in cities such as Berlin, Paris, Glasgow and Warsaw. In 2012 he received an honorable mention from the Jury of the ARTAQ Awards.