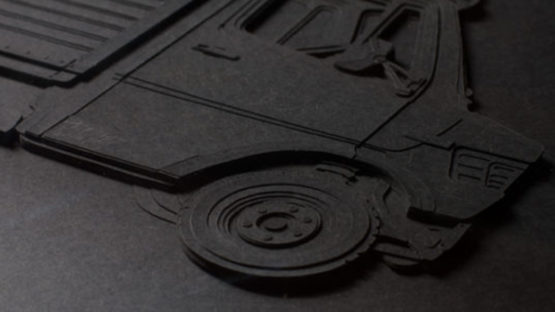 Neuröne’s work takes the form of skillful paper sculptures that have little in common with origami. Having been deeply involved in Marseilles’ graffiti boom in the 2000s, Neuröne is now restoring paper-based art to center stage by blending it with the subversive culture that has served as his inspiration since his teenage years.

Like an architect, Neuröne cuts and dissects the image to create multiple layers that he then places on top of one another, fascinated by the effect that the light can have on them. The result is the emergence of a subtle depth, revealing the different levels behind each cut layer and offering the viewer new perspectives. The artist’s approach is firmly anchored in the iconography of the world of graffiti, incorporating the concept of vandalism with an ironic outlook. The pivotal element of his work is the subjectivity of perception, blurring the lines of vandalism to create an aesthetic work from what remains.