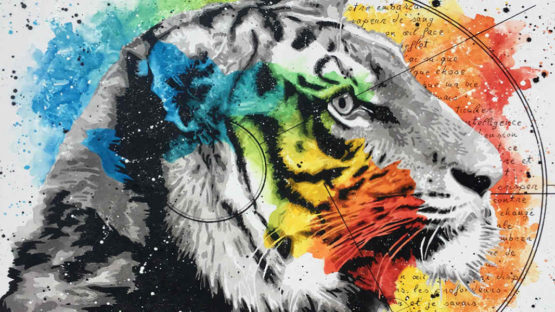 Placing the human and animal emotions into the core of her art, Nyne Factory represents a distinctive vision of the world that surrounds her, using the canvas and paper as the medium for transferring her purest feelings. Her animal portraits question the future of the living beings on this planet, emphasizing the role and influence of man symbolized in handwritten text or industrial scheme. Drawing inspiration from everyday life, through the melancholic narrative and use of vivid colors, the artist conveys the hope and belief that human decisions will be on nature’s side. Influenced by various contemporary movements, the artist admits that she is particularly fascinated by the aesthetics of Pop and Street Art.

The Art of Nyne Factory

Nyne Factory was born in 1984, in Clermont-Ferrand. Finishing her studies in Applied Arts, Computer Graphics, and Visual Communication, in 2013 she decided to exchange the keyboard for the brush. Her work has been exhibited in several solo and group shows, while the collaboration with the Urban Gallery and the Artélie Gallery brought her more engagements, invitations for charity auctions and more exhibitions.

The artist is represented by Galerie Urbaine.

Nyne Factory lives and works in the south of France.