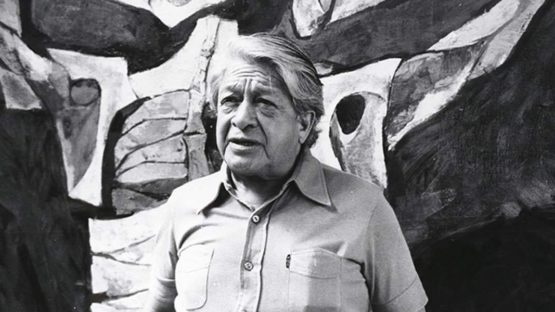 Oswaldo Guayasamin was an Ecuadorian eminent painter and sculptor whose heritage traces back to Quechua and Mestizo indigenous populations. Guayasamin dedicated his entire life to art and he was also a passionate supporter of the communist Cuban Revolution and Fidel Castro. He was given a prize for an entire life of work for peace by the United Nations because his humanist work reflects the pain and misery of mankind and speaks against the omnipresent violence in the twentieth century, marked by world wars, civil wars , genocides, dictatorships and torture.

Guayasamin is originally from Quito, Ecuador, and he began painting and drawing since his early childhood. He comes from a poor family – his father was a carpenter and Guayasamin was the first child of ten children in his family. His earliest paintings were mostly caricatures of his friends and teachers and he used to see these paintings to various tourists in order to collect enough money for education. Although his parents didn’t support his decision, he enrolled at the School of Fine Arts in Quito, where he remained for seven years and received the title of painter and sculptor in 1941. He was the best student in his class. In 1942, he held his first exhibition in Quito, which caused a great scandal, because Guayasamin wasn’t reserved about decisive social criticism. Shortly after this exhibition, he moved to Mexico for several months, where he worked with the great muralist Orozco, who helped Guayasamin related to the birth his own aesthetic language.

In 1943, Guayasamin spent seven months in the United States, touring various museums in order to study the works of Goya and El Greco, among other masters of painting. In the early 1940s, the ecuadorian befriended Pablo Neruda and made a long trip through Chile, Peru, Argentina, Bolivia and Uruguay, during which he took notes for his great series called The Trail of Tears. This series revolves around the theme of indigenous, black and mestizo populations in America. The realization of this important work was possible thanks to the support of Benjamin Carrion from the newly created House of Culture. The Trail of Tears was exhibited for the first time in 1952, at the Museo de Arte Colonial Quito and throughout the year at the Pan American Union of Washington and in Barcelona in Spain. During the Biennial in Barcelone, Guayasamin was awarded the Grand Prize for his painting achievements, which combine the elements of cubism and expressionism. In 1957, he received another award – the Best Artist of South America Prize, awarded by the Bienal de Sao Paulo in Brazil. One year later, in 1958, Guayasamin made two important murals: The Discovery of the Amazon River, made in Venetian mosaic, and The History of Man and Culture, for the Faculty of Law at the University of Ecuador. In 1960, he received the Grand Prix Hall of Honor in Mexico, which was the award that marked the beginning of his international career.

The Trail of Tears series revolves around the theme of indigenous, black and mestizo populations in America

The Age of Anger

After several years of hard work, in 1968, he presented in Mexico City his second large series, called The Age of Anger. This series consists of 260 works grouped within smaller categories, such as Hands, Heads, The man’s face, Concentration Camps, Women Crying and so on, in which the painter gathers various elements of his own life experience and translates them into a dazzling succession of contemporary dramas and tragedies. The Age of Anger has been considered one of the greatest achievements in the twentieth-century painting inspired by politics. After the initial display in Mexico, the series was presented in Barcelona, Prague and Paris. In 1973, Guayasamin was named president of the House of Culture of Quito, which was a position that allowed him to carry out an extensive program of cultural diffusion. During 1977, as a tribute to his work, the Ministry of Foreign Affairs organized in Quito a retrospective of his work. A couple of years later, in 1981, the House of Representatives of Ecuador recognized the major significance of his work, by creating the Guayasamin Foundation.

Guayasamin as a National Treasure

Guayasamin died in 1999 and this was considered a great loss. He is still lauded as a national treasure of his home country. In 2002, three years after his death, Guayasamin’s architectural masterpiece The Chapel of Man was completed and opened to the public. The Chapel is meant to document not only the cruelty and sadness of our world but also our potential for greatness and prosperity. The Chapel of Man is located close to Guayasamin’s childhood house, in the hills above the town of Quito.