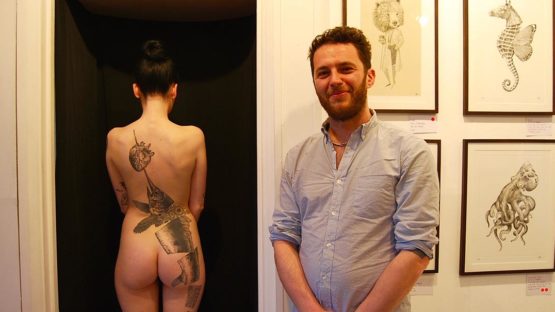 Otto D’Ambra is an Italian visual and internationally renowned tattoo artist, known for his avant-garde tattoo style and surrealistic hand-made prints and etchings. His tattoos, drawings, and etchings revolve around the concept of hybrid animals, which are a mix of regular animals and mechanical parts, such as light bulbs, bottles or TV screens. D’Ambra’s style resembles the illustrations and sketches found in the studies of famous 19th-century biologists, yet the artist incorporates some unexpected, modern elements and a certain symbolism in his unique depiction of hybrid creatures.

Otto D’Ambra was born in Milan, Italy in the late seventies and he graduated from the Academy of Fine Arts, Accademia di Brera, in 2003. Since he was a kid, he enjoyed drawing and experimenting with different techniques. With his degree in set design, he started collaborating with the circle of interior designers in Milan, ranging from restaurants and bars to fashion events. This experience enabled him to develop creativity, insightfulness and great knowledge of materials and techniques. Fascinated by art and aesthetics, D’Ambra didn’t limit himself just to his previous knowledge and experience. In addition to his work on set and interior design projects, he got interested in other visual art fields, such as tattoo art and etching. D’Ambra moved to London in 2009 and three years later opened his own studio there, called The White Elephant. The studio is now open as a multifunctional space for various artists, besides D’Ambra.

In addition to his work on set and interior design projects, he got interested in other visual art fields, such as tattoo art and etchings

In 2005, Otto D’Ambra took a step in his artistic career – and that step was towards tattooing. In this period, he became a tattoo apprentice, learning how to work with the machines and apply ink to skin. After this training, he worked for several years at the Italian tattoo studio called Trafficanti d’Arte, before moving to the UK. D’Ambra tattoo style is highly influenced by his background in Fine Arts. Unlike many other artists who adopt classic and established tattoo styles, Otto decided to develop visual identity true to his own, unique sensibility. His tattoos are packed with symbolism, rich details, and unusual combinations. The same goes for his drawings and etchings – his illustrative style is characterized by precise lines and a sharp contrast created with careful placements of highlights and shadows. The unique style of his tattoos and drawings resembles illustrations found in the journals of the 18th and 19th-century naturalists and explorers. Each artwork is an original illustration, in which D’Ambra combines animal and symbols . His hybrid animals are a truly impressive blend of organic and inorganic elements and underline the extreme technical aptitude as well as the refreshing creativity of the artist.

Since 2005, Otto D’Ambra has been creating a recognizable, unique style that has achieved an international success. He has participated in several solo and group shows, and his last solo show, called Ecce Animal, is currently displayed at Burning Giraffe Art Gallery in Torino and will be open for visitors until June 11, 2016. This show is a great display of D’Ambra’s signature style found in his brilliant paintings and tattoos, which combine graphic realism and symbolism, the usual and the dreamlike.

Featured image: Otto D’Ambra with his artworks – image via curiousdukegallery.com
All other images courtesy of the artist.