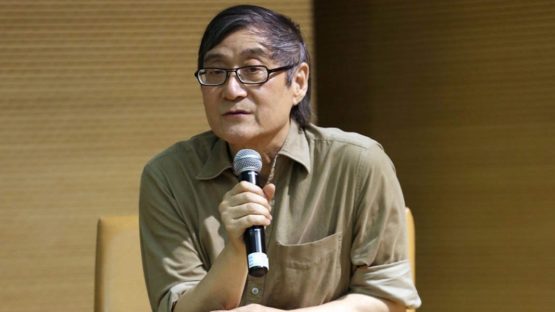 Pan Gongkai is a Chinese artist and educator, a fervent advocate of China’s indigenous artistic traditions, who brings the passion of a practitioner to discourse on the relationship between Chinese and Western art today.

Pan has played a decisive role in the intellectual life of his nation, serving as president of two esteemed fine arts academies, the China Academy of Art (CAA) in Hangzhou (1996-2001) and the Central Academy of Fine Arts (CAFA) in Beijing (2001-14).

His own artistic practice and intellectual endeavors have been shaped by a belief in the presence of a distinct and modern consciousness in twentieth-century ink painting in China. The corollary is that modernity in Chinese art in the early twenty-first century must not of necessity be tied to Western theories, media, and practice.

His first USA exhibition was in Frye Art Museum by the name Withered Lotus Cast in Iron. A subject celebrated by Literati masters of the past, the withered lotus can suggest bitter feelings and trauma, both personal and national. The autumn blossoms in Pan’s painting were, however, neither frail, nor weak; instead, they are forged with strength, “cast in iron.” Such a reference to iron in the context of ink painting is not unusual. Ancients would speak, for example, of using the brush as “iron, splashing the ink like waves,” and of forceful brushwork that resembles wrought iron.

Pan Gongkai is convinced that ink painting has prevailed and flourished to the present day due to its inherent ability to respond to, and reflect, periods of disjuncture and social turmoil such as that which has pervaded China over the past one hundred years.

He is the current president of the China Central Academy of Fine Arts and lives and works in Beijing.