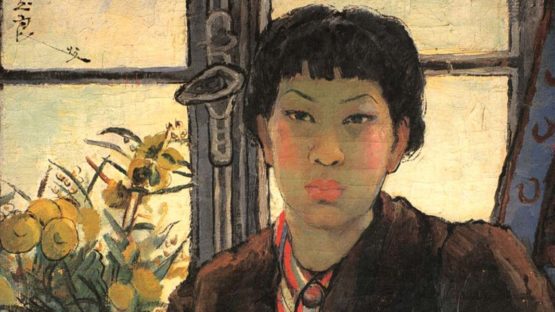 Pan Yuliang was a Chinese painter, renowned for her self-portraits and female nudes, often of herself lacking available models or of bathing women in the Shanghai bath houses.

Pan Yuliang was born in 1895 as Zhang Yuliang in East China’s Jiangsu Province. Pan was orphaned at age 8 and sold to a brothel in Wuhu at age 14, where she met her future husband who married her as his second wife. Encouraged by her husband, Pan studied art in Shanghai and went to France and Rome for higher art education. After achieving great success and recognition in Europe as an artist, she came back to China to teach art at China’s famous art schools. Due to the socio- political situation in China that did not support the idea of a woman, who had been a former prostitute, teaching life drawing, Pan had to leave for France where she lived till the end of her life, constantly missing her homeland.

Pan chose the female nude as the subject of most of her paintings to depict the vitality, healthy beauty and maternity of women. She was a master of Expressionism and Realism, and skillful at combining traditional Chinese art style with Western art to create a unique style. Inspired by Chinese Calligraphy, Pan used bold and curved lines to define her figures. During that time nude figure paintings were viewed as vulgar and cheap, and consequently Pan was criticized by the Chinese for painting and exhibiting her nudes in the conservative Chinese society. Her self-portraits are meant to be viewed as the artist’s expression of her inner feelings, depicting her sorrow, her desire for a family and her loneliness.

Pan left Shanghai for France in 1937, and settled in Paris. She worked and lived in Paris for the next 40 years. Chinese expatriate artists in France elected her the chairman of the Chinese Art Association. Her works were exhibited internationally, especially in the United Kingdom, United States, Germany, Japan, Italy, Switzerland, Belgium and Greece.

Pan died in 1977 and was buried in the Montparnasse Cemetery of Paris.