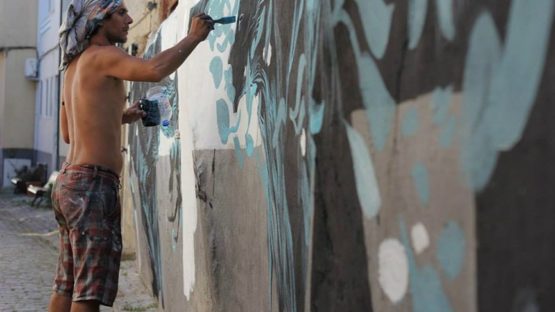 Major artist of the street art scene Lisboan Antonio Correia aka Pantonio (Lisbon, Portugal)  has developed a very personal visual vocabulary and a strong graphic style with remarkable amplitude. Pantonio’s animated works of a motionless movement proceed from a peculiar dynamics at the whim of a wave flow.

Inhabited by a fantastic bestiary in almost human eyes, his figurative work are driven flexible lines with fluidity renders the momentum of a disheveled leak, a dash, a mad hunt. Its motive the best known in France, thanks to its intervention in the Tower 13 is the horde of black rabbits failed, symbol of fear, escaping in an uproar, and frenzy as an anthropomorphic metaphor for contemporary society.

After studying Fine Arts and school graphics, Pantonio occurs for the first time in the street when arrived in Lisbon in the 90s. Public art, pop art adapted to the environment,  urban art aesthetic notes elementary accessible to all. Space to enter to pass a message. Pontonio often brings a social meaning to his work through which he wishes to echo the crises. The urban area is for him a source of activism. The city generates images, shapes, movements and extension ideas. Combining taste of intrusion, distrust in relation to established programs, interventions relate to both subversion and dissenting poetic.

Pantonio is from the islands of Azores, and his paintings are based on the strength of the black rocks and the sea. Pantonio is one of the most prolific and influential artists of the street art scene in Lisbon. Deeply influenced by the inhabitant of Lisbon culture, his works regularly refer to riches Tagus: sardines, cod, octopus, mermaids, ropes, boats.

Pantonio designs, which adorn the walls of the city, also deliver messages filled with social meaning, as evidenced by this fresco imaging a boat or bar seems maintained by the authorities at the stern while the people carry arms at the bow, ink hand in protest.

The graphic style of Pantonio, easily identifiable thanks to the dominant colors blue and black, further enhances the reputation of this unique artist, who gives generously to the street for our greatest pleasure.