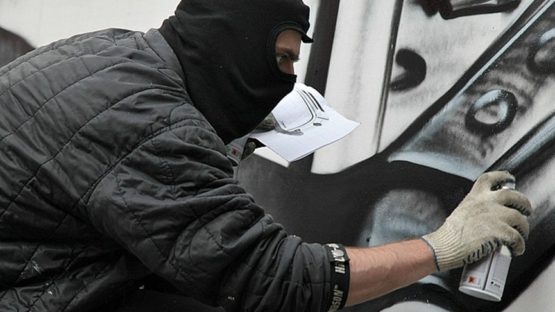 Pasha 183 received a degree in communicative design, but never used the techniques he learned during his studies. He though had several jobs besides his nocturnal graffiti career, such as System administrator work, designer, restorer, art director, etc.  In 2012 he received the sudden attention of the international press.

The works of Pasha 183 range from murals spray-painted on public structures to combinations of audio and video, at times accompanied by a political message. His works have been compared with those of the British street artist Banksy, and U.S. artist Keith Haring.

Like Banksy, Pavel has chosen to keep his true identity a secret, revealing only a few biographical details on his website, including his birth and residence in Moscow and his degree in communicative design. However, Pavel 183 did not like the comparison, after 14 years spent forming his own style.

Despite Pavel’s degree in design, he used to attack advertising for its power to deprive people of free will. He also describes designers as money makers and compares them to real artists, whose work he respects most.

Pasha 183 was best known for his socially critical installations and grey-scale photorealistic murals. Later in his career, Pukhov explored different techniques of creation, eventually learning to draw in the dark with lights and to incorporate existing environmental aides, such as Moscow’s waterways and concrete spaces.

While his works addressed political issues, Pavel 183 claimed not to consider himself a “political artist”. One of his last works addresses the issue of the 2011 Russian legislative election, the results of which many in Moscow and around Russia have disputed.