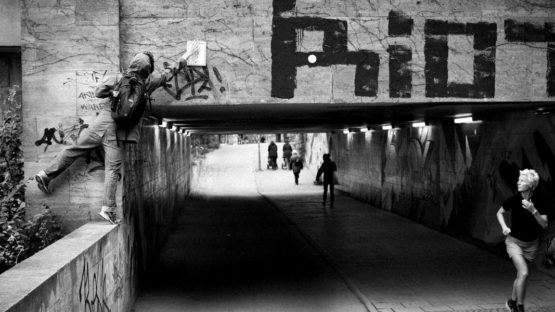 Peintre X is a graffiti and street artist from Munich, Germany, best known for his intricate portraits and intimate medallions that are hanged up anonymously in the streets, returning art to the community which inspired it in the first place. In the time when the art of portraiture is so omnipresent, that it has become almost impossible to create pieces that are original and unique, artist Peintre X has found an artistic language that makes his multifaceted portrait stand out above all the rest. His distorted depictions of both real and fictional characters obscure and emphasize at the same time, always leaving the viewer wanting more.

Inspired by the Greats

Peintre X is influenced by a variety of sources. He is inspired by an array of prominent contemporary artists ranging from Max Beckmann and Damien Hirst to the queen of performance art Marina Abramovic. His fascination with these contemporary greats is quite bluntly portrayed in his works whether trough intricate quotes like “life is not always a Damien Hirst” or trough a set of specially designed artworks like The artist is not present series of prints dedicated to Marina Abramovic. The elements of Cubism are visible in his celebrated animal masks series where he employed vivid brushstrokes and clear color accents to involve the distorted aesthetics in his figurative paintings. His exploration of pop culture, consumerism, and everyday objects add elements of Pop art to his work.

Strange and Familiar Characters in the Art by Peintre X

Peintre X is known for his small water colors that are framed and attached to walls in different public places. Next to it, a passerby can find a QR code which is connected to the artist’s homepage and discover a whole new artistic universe. Art by Peintre X can be explored both trough the characters he portrays and his use of colors and light. The artist skillful use of layers and energetic brushstrokes powerfully convey the inner quality of the objects he paints such as a taste of a banana or a transition from hot to cold. This portrayal of inner qualities is best depicted in his powerful portraits that depict the characters of people behind the disguise. The individuals depicted in his works are as mysterious as the artist himself often hidden behind a variety of superhero masks and hats or, at times, simply turned upside down to make their identification more difficult for the viewers. And yet they seem strangely familiar like looking at someone we used to know or maybe someone we once wished to be.

His subjects are intentionally striking and distorted as Peintre X focuses on emphasizing their eyes, red lips, and high foreheads. The artist uses the socio-cultural references to depict the ambivalent tendencies of human existence forever lingering between the deep skepticism and never-ending hope. Though they often incorporate the images of celebrated artists like Marina Abramovic and Damien Hirst or pop culture characters such as Batman artworks made by Peintre X always reflect back on the artist by portraying his own world full of intriguing ideas and intense emotions. Apart from his striking portraits the artist is also known for his nipple medallions that he continuously hangs on the facades over the globe. The artist celebrated nipple installations evoke the sensation of intimacy and vulnerability that’s often highlighted in juxtaposition with the harsh reality of the surrounding space.

The artist is represented by 30works Gallery.