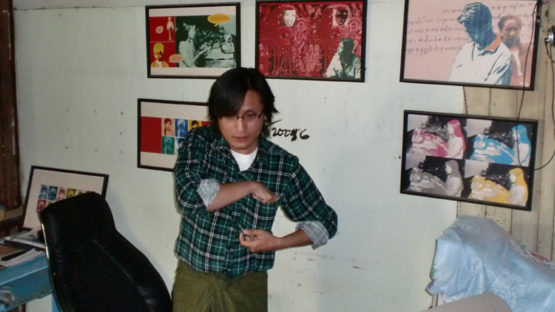 Phyoe Kyi is a formally trained painter, graphic designer, and self-taught installation and performance artist, born in 1977 in Taunggyi, Shan State, Myanmar. Kyi graduated from University of Culture, Yangon, Myanmar, majoring in Painting and has worked as graphic design teacher since 2006. He founded the “Phyoekyi” art workshop, in Taunggyi and Mingun.

Phyoe Kyi’s art practice deals with social concerns. Matters such as poverty and inequality are regularly described in his visual language, recalling the viewer to the concrete struggles of those with no voice who are so often ignored. In 2008, in the immediate aftermath of Cyclone Nargis, Phyoe Kyi embarked on a project that gave voice to those caught in the effects of the destruction that destroyed and degraded their humanity. By turning to the environment as a metaphor, Phyoe Kyi articulates that emptiness from which people constantly attempt to build a future.

While Phyoe Kyi is best known for his conceptual work and performances, his animated films are also highly regarded. Phyoe Kyi’s accompanying video has a distinctly detached modernism as he examines the subconscious terrain of Myanmar’s parliament. The shifting of the scenes drowns out any coherent story and instead the power structure has been manipulated to show how Myanmar’s government has become detached from the very people it is meant to serve. It is no longer human and has no real form. Well known for his candid expressions and views, artistically articulated through video, film and installation, Phyoe Kyi is also a performance artist.

Most renowned for his computer animation, Phyoe Kyi has participated in numerous art exhibitions in Myanmar and abroad. He participated in the 3rd Fukuoka Asian Art Triennial in 2005 as well as the 11th Asian Art Biennale Bangladesh in 2004. He was also a participant at the 2012 Radius of Art in Berlin where he performed his work Once Upon a Time there Was Nothing.