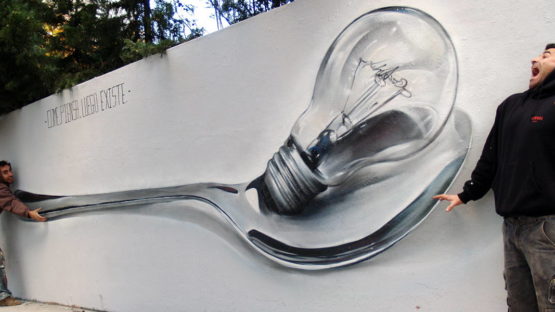 Pichi & Avo is a renowned graffiti duo from Spain that produces a spectacular explosion of fresh colors and impressions. They create breathtaking figurative detail and quality. Their work is very striking and always commands the spectator’s full attention.  Pichi and Avo mix their own studies degree in their work design and fine arts.

All has began in 2007, bringing a spectacularly lucid splash of Mediterranean color to the streets of Valencia and wider Spain, Pichi and Avo have infused a stunning level of figurative detail into their work. Hints of surrealism leap out and slap the viewer about while drawing you into a radiant explosion of unrestrained, spray painted talent. Creating a massive stir in their hometown and just about to set the rest of Europe ablaze, leads them to participate in numerous national and international events.

From Valencia- Spain, Pichi & Avo are one, fleeing from the self-centeredness of graffiti, united to create a single piece of work, two similar visions of the world are the result of their work, which is constantly evolving. Stroke, signatures, collage… explosions of colors that invade the subconscious, precipitated by the personal rant of their artistic ideology and an aesthetic widely argued in the texts of Walter Benjamin. Pichi & Avo have merged within their work an amazing level of figurative detail with touches of surrealism, they have attacked and beaten the spectator, bringing them in whilst immersing them in a radiant burst of spray talent where all barriers are surpassed.

Pichi & Avo recite a conceptually urban poetry, born from the artistic formalism of the street, using any artistic inventiveness that can be applied, transferring fragments of a wall to the canvas in a personal version, viewers can expect a heady concoction of ancient and modern that remixes classics from art’s illustrious history and rewrites the rulebook in the process.

Pichi & Avo both live and work in Valencia, Spain.