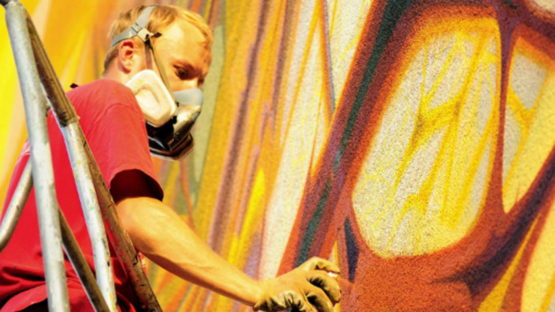 Krzysztof Syruć aka PROEMBRION is a Polish artist who was born in 1984 and started doing Graffiti around 1996. His early work consists of abstract lettering which quickly began evolving in style and manner. These clusters are driven by their own dynamic and often border total chaos.

Later, he obtained a Masters degree in Architecture from Gdańsk University of Technology. This experience has opened up his mind to new means of composition, his main inspirations being nature and especially mathematics. With the addition of Architecture, PROEMBRION then started constructing theories and works revolving around urban planning: dynamic forms and structures that challenge the recipient perception, not only of their immediate surroundings, but also of the city as a space.  His approach towards complete abstraction coins his unique style and is building a bridge between graffiti and contemporary fine arts.

“I started painting when I was twelve, in 1996. From this time my graffiti has moved through various evolutionary states, made by keeping strict geometric rules. High-density letters combinations became more disciplined by closing it into hexagonal shape and by using, similar angles. Creating all these puzzles directed me to find a style easier to shape – diagonal style. I developed it so, that I could paint with one-line improvisation. This type of acting gave me a lot of flexibility and more contextual way of adding graffiti to space. Now my main rule is an intuition. It is a great pleasure to surprise myself. But on the other hand I am really fascinated by parametric, generative structures, by biomorphism and biomimicry. That’s what makes me develop new algorithms and to go by new rules. I generate very complicated 1-bit pixel patterns to see mathematics in pure form. I found there visual language of nature and I want to make it real.”

PROEMBRION’s body of work is spread across a broad variety of media, such as canvas, wall, room installation, digital and graphic design and currently even Augmented Reality programs. His art has been shown in many exhibitions across central Europe.