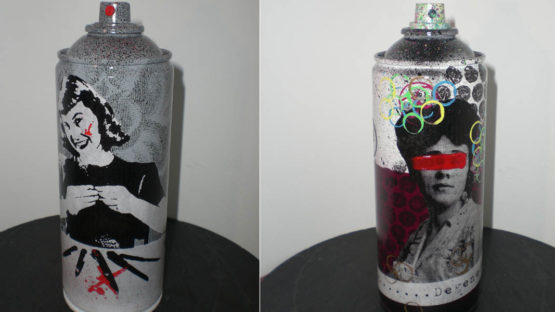 Prole is a British artist known for his work in a variety of mediums. Prole creates on canvas, t-shirts and screen prints.

Prole is trained screen printer. He is specialized in large format, textile and traditional hand. While he was perfecting this profession, art was just a hobby – until the 2008, when the global crisis came in kicking.

Prole became full time artist and has been doing pretty well since then. His striking and humorous artworks are usually combined with slogans and imagery of iconic idols of popular culture such as Mickey Mouse or Kate Moss.

Beside exhibitions and studio work, he has alsco launched a range of t-shirts with his art. The artistic name Prole comes from the word Proletariat used so often in George Orwel’s book 1984. The “proles” in that year could have created a better world, only they were interested only in films, football, beer, and the lottery, very much provided by the state itself. Sounds familiar?

Prole is represented by Ministry of Walls, a Street Art Gallery from Cologne, Germany.