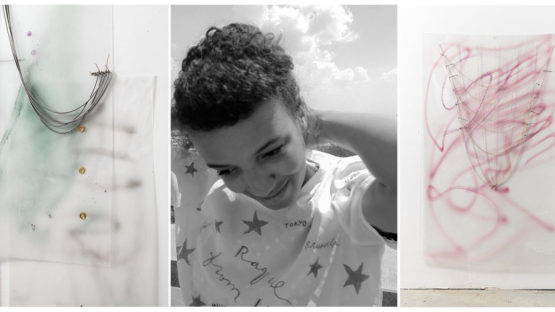 Raque Ford is a young contemporary artist from Brooklyn NY, whose work revolves around transferring symbols of the popular culture into installation and painting pieces. She often uses different kinds of mediums in order to do the necessary translation, with somewhat minimal approach.

Her educational path started in 2010 where he got her BFA at the Painting Pratt Institute. Following the bachelor degree, Raque obtained the Postgraduate Diploma of Fine Art Virginia Commonwealth University. In 2013 she finally obtained an MFA in Visual Arts at Rutgers Mason Gross School of the Arts.

Her work circles around conversations of performing identity and appearance. It is mostly in a form of a paintings with sculptural elements included. Raque uses collaging materials, and by cutting, puncturing, attaching and draping she expresses her own visual language. The core idea that this young artist want to illustrate is culture of performing your identity, be it gender, race or just attitude. She often uses music as an inspiration but also different kinds of everyday images, from roses or a butt selfie or a bad tattoo. All of these influences often invade her creative process or become even a starting point for creation of certain piece. As she said about her musical influences: “Pop music and pop stars have always been a fascination of mine as something to examine and study since a young age. My father, who was a music producer in the 80’s, would always tell me to examine music more closely as well as the image of a pop star. I never had an interest in making music or doing anything in that business, but it always enters my work as a way of examining identity and persona of myself and others.”
In some of her most recent pieces, she deals more with mark making and a false sense of delicateness. Most of the marks are hidden and done on the backs of the piece and are only able to be seen because of the use of transparency. These formal decisions relate to the idea of playing the role of femininity/female gender.