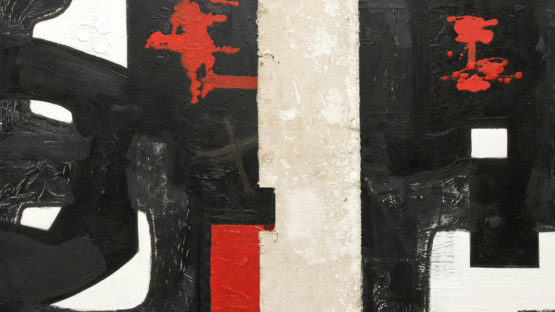 The oeuvre of Raymond Guerrier is a really good example of how various painterly currents influenced one’s own artistic development in order to establish the personal style. The way the artist transferred from figuration to rigid abstraction and as the time passed by became known for it tells much about his search for the perfect form. By simplifying his compositions, depriving them of perspective and framing the forms with the thick black line he managed to create outstanding aesthetical and compositional format that made his art renowned in the terms of both local and global art history.

Becoming an Artist in Hard Times

Raymond Guerrier was born in 1920, in Paris. The artist was self-taught and absorbed his knowledge about art from many of the museum’s attendance. That has helped him to shape austere temperament and to reject the picturesque. The oldest listed painting by Raymond Guerrier dates from 1934. Guerrier stated that he developed as a painter largely thanks to the exhibition of Georges Braque and the workshops at the Galerie Maeght in 1947. In the early 1950s, the artist was involved with photogravure in order to maintain his existence. His work at this time, typically for the post-war atmosphere, consisted of a semi-figurative style painted in a muted palette that had affinities with the Forces Nouvelles movement.

Abstraction as a final destination

It was in when Guerrier was taken on by Galerie Stiebel and given his first solo show. In 1953 painted Paysage au mask and was awarded the Prix de la Jeune Peinture, and in 1954 he was a member of the jury alongside Paul Rebeyrolle, Bernard Buffet and André Minaux, three painters with whom he shared his position in the aftermath of the post-war pessimism. In 1955 Guerrier left Paris and moved to Provence, where he became friends with the Provencal poet Charles Galtier. Some years later, he married Francesca, daughter of the painter Francis Montanier, herself a painter and ceramist. The landscape surrounding him in Eygalières, as well as his travels which offered him to see Spain, Sardinia, Italy, Greece, Morocco, Jordan, Israel have influenced him much.

Intense relations between the forms

These travels seem to have had a significant influence on his painting which became more minimalist with increasingly abstracted forms and cleaner more radiant colors. His palette gradually was formed out of austere bare tones in which the ochres dominate became somehow his trademark. In one point, Raymond Guerrier tried to describe his approach by saying that the search for the essential, the rejection of the anecdote, the importance of reality and its depth and its role to the key of matter are the most relevant aspects of his work.

The year 1957 brought Guerrier with the utmost recognition of Chevalier des arts et des letters or The Order of Arts and Letters which is high ranked French decoration given to the persons who have distinguished themselves by their creation in the artistic or literary field. Three years later, the established artist was called to realize costumes and décor for the theater play Génousie, directed by René de Obaldia. Later on, the final transition to abstraction was embodied at a major show in Geneva at the Galerie l’Athénée in 1962 and since then Guerrier continued to hold numerous exhibitions throughout Europe, also in Venezuela in 1964 and Buenos Aires in 1970. Over the years Guerrier has exhibited worldwide and his works are represented in many museums spanning from Musée National d’Art Moderne in Paris over Musee des Beaux-Art, to the national art collections of Venezuela, Japan, Luxembourg, and Belgium.

Raymond Guerrier passed away in 2002, in Eygalières, France.