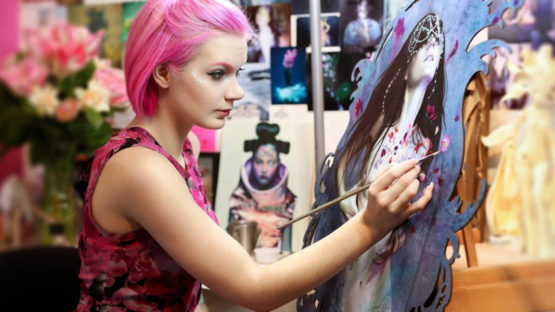 Redd Walitzki is a German contemporary artist based in Seattle, who works in a wide range of mediums, such as painting, sewing, digital media, video and photography. Redd graduated from Cornish College of the Arts with her BFA in 2007 with a concentration in Painting, Video Animation and Printmaking.

She is best known for her paintings of sensual women on one-of-a-kind laser cut wooden canvases. Redd’s portraits, framed in both traditional and unconventional ways, depict femininity surrounded by flowers and dripping color in bright forms, making it a mirror of her own eccentric, but tender personality. Her muses transmit beauty, innocence, euphoria – transporting the viewer in Redd’s imagination. Redd’s work is a fusion of Rococco inspired elements with a unique mixed-media technique. She creates intricate, swirling laser cut wood canvases whose flourishes echo her fluid use of paint and mixed-media materials. Artist’s main inspirations are fashion, nature and biology.

She has participated in many solo and group exhibitions in Seattle, San Francisco, Melbourne, Tokyo, Los Angeles and New York, among others. Redd can usually be found in her studio painting to BBC Documentaries, playing with her pet opossum, or chasing down the next strange adventure on her scooter.

She is currently based out of Pioneer Square, an art district in Seattle, Washington.