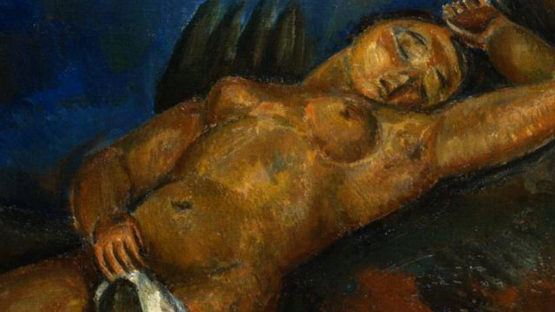 René Victor Auberjonois (18 August 1872 – 11 October 1957) was a Swiss post-impressionist painter and one of the leading Swiss artists of the 20th century. After beginning his career in France as a Realist, Auberjonois began to employ Post-Impressionist techniques after 1903. His subject matter was mostly that of his native Vaud, such as natural landscapes, bathing women or rustic still lifes. In the early 1930s, his paintings became progressively simpler in an Expressionist style close to that of Modigliani. The personal crisis caused by the polemic over his murals is reflected in the use of fewer and darker colours after 1936. Afterwards, Auberjonois realised some of his most significant works as a colourist inspired by Delacroix and then Rembrandt, including Hommage à l’Olympia (1943), Baigneuses dans la forêt (1944, Museum zu Allerheiligen, Schaffhausen), Clown et petite écuyère (1946), Portrait de l’artiste (1948, Kunsthaus Aarau), Fille dans la chambre rouge (1948, Museum zu Allerheiligen), Nature morte au crâne (1950) and L’arène jaune (1953–54).