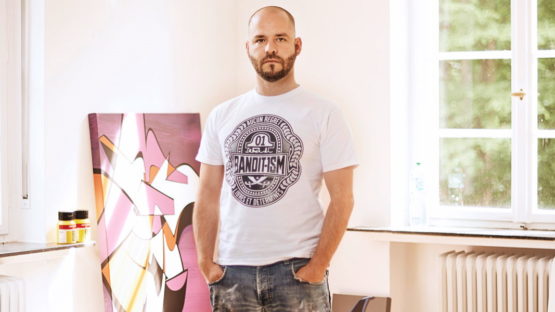 Reso is an internationally renowned German artist who discovered the art of graffiti writing in the mid 80´s. Reso’s abstract letter forms are created as the artist followed the legacy of graffiti as his style was evolving into a singular, graphic, urban inspired expression.

For Reso, also known as Patrick Jungfleisch, the city of New York has, in many ways, always played a significant role. A strong family bond enabled him to spend several weeks a year with his New York side of the family in the greater metropolitan area. It was there, that Reso was first exposed to the graffiti carrying subways, which triggered his ever lasting fascination for traditional graffiti. Reso picked up the first spray can in the late 1980’s and soon there after his local reputation as graffiti-writer had transmerged into international fame. Up until 2004 Reso visited many of Europe’s and North America’s major cities, leaving his signature designs and graphics on hundreds of public walls.

Even after switching from spraying on walls to painting on canvas, Reso’s original style of writing is easily recognized in his most recent works. With the lettering and typography still serving as a foundation, the new elements act as a subtle picture frame, waiting to be filled with a written self-portrait.

Contrary to the artful and typographic lettering of Reso’s merits, the simple and functional writing that we are exposed to in our every-day-life is very much influenced by the ferocious and fast-paced heartbeat of a modern-day society. According to Reso, the subtle and delicately shaped typographic differences waiting to catch our attention are rarely even noticed by those passing by on their way to work. For Reso, this was reason enough to break with the norms of traditional typography.

His way of lettering is free of restrictions and his conscious, yet emotional approach away from rational functionality, has dominated his work ever since. Similar to a unique style of handwriting, he regards the shape, curve and pitch of letters as a true and honest mirror of one’s character, a revelation of the inner soul committed to share a felt emotion with those seeking to observe. Unwilling to bend to the common perception of right or wrong, letters are rearranged, transformed, modified and in a way even redefined.

In Reso’s artwork, letters develop  a one-of-a-kind dynamic. Every line, each brushstroke, even a single paint tear initiate the following before coming together in a visual masterpiece. In the solitude of his studio, he manages to channel and merge the experiences and emotions gathered during the numerous journeys that lay behind. Every destination and the sensations witnessed, but especially those experienced away from the major tourist attractions, inspire his work just as much as the close relationships to the various artists and friends he has met along the way. Every color and every shape pays tribute to a single moment, an emotion, an experience – a written self-portrait.

In 2014, Reso opened together with his wife Silvia ‘Galerie Zimmerling & Jungfleisch’ in Saarbrücken, Germany. Gallery pursues a clear contemporary art program with an emphasis on Urban Contemporary Art. After many years of experience and successful cooperation with other galleries and institutions worldwide, the gallery aims to present a wide range of international artists.
In 2015, Reso featured in group exhibition called “Urban Selection” that took place at Zimmerling & Jungfleisch gallery.