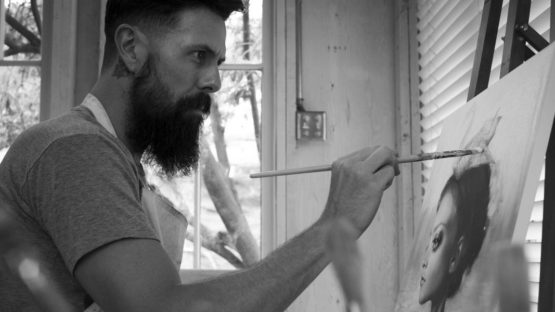 Richard James Oliver is an artist born in Pontypridd, Wales in 1975. He studied Fine Art at the University of the West of England and undertook his Masters at UWIC (Cardiff Metropolitan University, formerly University of Wales Institute, Cardiff) in Wales. In his time between studies, Oliver built his reputation, beginning in Wales and later gaining recognition throughout the UK. Oliver’s early work focused on his homeland, particularly the struggle of its youth trying to find identity in the aftermath of the local mining industry’s demise. His work often showcased the skeleton landscapes of mining villages in the Welsh valleys juxtaposed with contemporary youth. His latest works explore the universal subjects, from environmental issues to humanitarian and social problems that are close to his heart.

Since becoming a parent, Oliver has explored the anxieties of raising a child in an environment on the brink of disaster. The images touch on the tragedy of children forced to survive in an apocalyptic environment and violently fend for themselves. He transforms the natural instincts of fatherhood and family protection into striking visuals. More recently, portraits have crossed into the dark, brooding world of Grim’s fairy tales and surrealistic subjects that help convey the emotion and tragedy of our world’s children. Oliver works closely with many charities, most recently donating proceeds to Dreamlovecure.org and City of Hope’s Department of Paediatrics.

His career as an artist was interrupted when he gained considerable success as a rock musician. This meant he was not able to paint or exhibit for many years due to recording and touring commitments. Though his musical career continues, in 2013 he returned to painting at his home and studio in Los Angeles, bringing new themes and ideas.

His work has been included in numerous European group shows, which then segued into solo shows, including at the Museum of Modern Art in Wales, Known Gallery, Hollywood, Los Angeles, Attic Gallery, Swansea and Rhondda Heritage park permanent Mural.