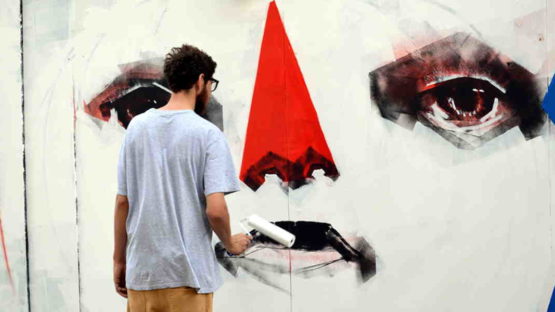 Rodrigo Branco is a Brazilian artist who paints faces and elements that inhabit his imaginary, childhood and the life that flows from people and the streets of the world. He represents all the complexities of this megalopolis on his strokes. With a surprising and complex biography, throughout his almost thirty years of age, he managed to combine unusual sights of his world with kindness and heart. His will to become a better artist, being from studying in social art projects when growing up or with his peers and years of dedication laid down the path for him to become a talented and professional artist that he is today.

Rodrigo addresses a particular topic: people. He gives to his characters no definition to its borderlines, strong colours and unusual faces.

Aligning a singular feeling, powered by the expression of restless traces, his work challenges us. Influenced by geographic questions and resignation of memories, the artist builds a research plan based in painting and traversing many fields like canvas, walls and paper between others.

Born in 1986 in southern outskirts of São Paulo with north-eastern Brazil’s descent, he was first influenced by his family members to pursue a career in art. Later, during his teens, he discovered the graffiti universe on the streets of his neighborhood and photography with his father. This determined the way he approaches the many facets of his art.

He’s been part of many expositions in Brazil and other countries like Germany, US and England and also art festivals like ArtRua in Rio de Janeiro, II Muralist Bienal in Cali (Colombia) and others.