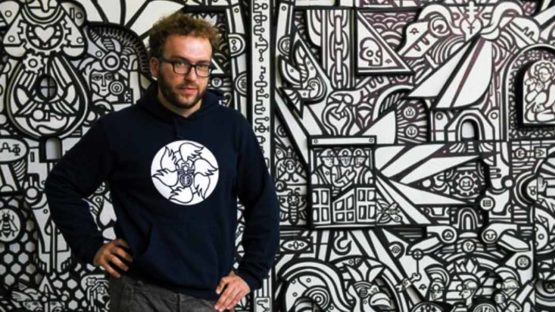 Roman Minin is known as a painter, graphic artist, photographer, author of objects and installations and a street artist.

He was born in 1981 in Dimitrov in the Donetsk region, Ukraine. Minin graduated from the Kharkov Academy of Design and Arts in 2008. From 1998 to 2008 he took part in a lot of non-conformist, underground exhibitions and rock concerts in Kharkov-city, Ukraine. In 2009 he received the Talent and Vocation medal from the worldwide alliance Peacemaker. Four years later, was nominated for the PinchukArtCentre Prize.

The Donetsk region, where Roman Minin was born, is identified by mining. For the people living there it is not only an industry but a way of life. Minin has taken that as the main subject of his paintings and stained-glass windows, a metaphor for a closed social system that allows no way out. With The Plan of Escape from the Donetsk Region, Minin created his own artistic escape route from that imprisonment. In that “plan” Roman states: “I was born in a family of miners. All my parents, grandmothers, grandfathers and brothers are miners. I know everything about this profession, because it became a part of my life. But I do not depict miners only as a symbol of hard work. First of all they are a symbol of search of light and fire in our life. Also, for me they are a symbol of a modern science, Data Mining, it makes the images of my miners actual for whole world, because any person as a miner extracts the meaning of life within themselves and in the world around him.”

His works have been exhibited in numerous solo and group projects in Ukraine and abroad. As one of the well-known figures in contemporary art in Ukraine, he organized and participated in numerous street art festivals, was a head of the program Isoliatsya in city space in the Isoliatsya centre of the modern art in Donetsk in 2012.