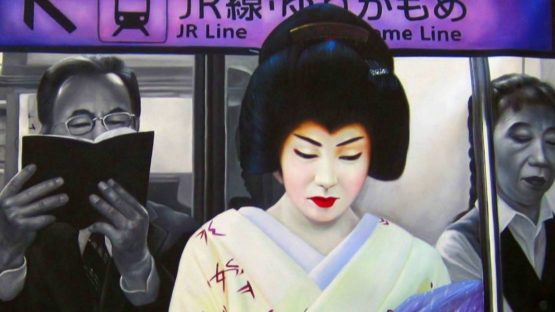 It is vital to know as much as possible about your place of origin. Knowing the traditions, customs, your country’s history – it’s all a key part of preserving our collective heritage. If we were to make a list of countries that successfully protected its legacy, The Land of the Rising Son would be on top of almost everyone’s list. Ryoko Watanabe is nothing more than one of the Japanese people doing her part in preserving the traditions of her country and the method she chose to do so is the medium of oil painting. She depicts themes from her state’s culture in a unique visual way by blending some ancient aspects of Japan with regular elements from modern everyday life.

Ryoko Watanabe comes to us from the town of Sapporo, the capital of the mountainous northern Japanese island of Hokkaido – a city famous for its beer, skiing, annual snow festivals featuring enormous ice sculptures and the characteristic tendency to protect Japanese traditional values. Watanabe draws her artistic energy from the pores of Sapporo and its proud cultural legacy. She is inspired by things that define what it means to be her countryman. Watanabe paints the traditional and powerful stereotypical characters of Japan such as the sumotori, geisha and samurai warriors. Out of those three subjects her work commonly depicts, geisha and samurai are globally renowned, with geishas heavily influencing the European life ever since the middle of the 19th century while the famous samurai have made their way into every country’s subculture. However, the sumotori – or the sumo wrestlers, as they are more commonly known – remain one of the iconic symbols of Japan that stayed almost exclusively theirs. The importance that followed these obese athletes over the centuries is astonishing and almost unbelievable for the Western world and its standards would most likely alienate persons with sumo wrestling features. Watanabe skillfully uses the subcontexts these subjects carry in themselves and turns it to her advantage by exploiting their reputation for sending an artistic message.

Although Watanabe’s depictions of samurai, geishas and sumotori are interesting on their own, the part about her art that strikes us the most is the setting in which she chooses to place her subjects. Instead of putting them in logical environments such as castles or arenas, Ryoko places them in modern buses, traffic jams, metro stations and concrete streets! It’s almost as if she steals these cult figures from their contexts and places them in a place reserved for one of us. Geishas and sumotori are always put in the first plan and are obviously highlighted. The way Watanabe pulls this off is by stripping the background of all its color, leaving it black and white, while she gives her main subjects vivid colors. By doing so, she is drawing attention to samurai, geishas and sumotori and letting us know without the slightest doubt that they are indeed the focal point of her work. Luckily for the audience, Watanabe has an excellent feeling for knowing precisely in which scenario to put her subjects for achieving the desired effect. From time to time, this can even lead to some humorous situations, like a battle-ready sumo wrestler that is apparently blocking the exit of a metro train. Ultimately, by drawing parallels between contemporary and ancient elements that could never meet each other in real life, Ryoko Watanabe folds a powerful combination of traditional culture with an upbeat modernist lifestyle.

Many of Watanabe’s paintings are humoristic in character

Taking Care Of Our Identities

Watanabe paints characters of Japanese heritage and emphasizes their importance for culture and collective state of mind. Her work does have a strong note of nostalgia, but it conclusively celebrates the unique characteristics of Japan’s history. Sure, you can analyze her work by the lack of color and say it’s all just a metaphor for how people are forgetting their own roots, but this is not the case with Ryoko. Watanabe not only makes sure that some segments of her legacy have a guaranteed place in modern Pop culture, but also that they may never make that final step from the contemporary world and into history books, thus becoming partially forgotten. Sumotori, geisha and samurai must all remain a piece of Japanese day-to-day life or risk losing an essential part of their identity. Ryoko Watanabe is just trying to prevent this – and have a bit of fun along the way.