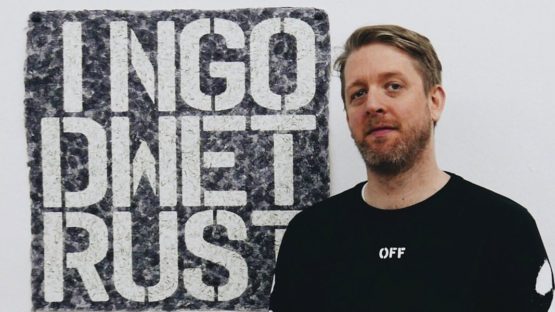 Reuven Schockner, by far better known within the art scene by his pseudonym of RYR, is a German author who initially started out on the streets where he was honing his artistic skills through graffiti painting. Before long, he made a bold decision to move into the studio where he continued to explore his creative interest in contemporary mediums, resulting in an art form that, it could be said, has an extra value. RYR makes his artworks out of money – not entirely out of usable banknotes, but also from handcrafted pieces of paper. His artworks contain symbols that are already present in our everyday life – Schockner just juxtaposes them and combines them with texts and letters that add a creative message.

From Painting on the Streets to Working at a Studio

As far as his artistic beginnings go, Reuven Schockner does not seem to think his initial development was a result of some landmark experience – he explains his creative origins with the following statement: It started fairly common, with some kind of pen and a few thousand sheets of white DIN A4 paper. Originally a graffiti author, RYR was always attracted towards the limited and simple approach to realizing a visual concept. Although he eventually moved away from the street art, this concept still plays a big role in his art-making practice. That idea was further developed by Reuven Schockner’s usual tendency to achieve a visual impact with his works.

Nowadays, RYR seems to focus primarily on his new art form of shredded money. Although experimenting with expressions based on the concept of currency is far from a novelty within the world of art, this author’s practice is still quite unique and RYR himself explains it with the following statement: Money itself is a concept. We undoubtedly believe it, but there is actually no equal value to the material, shape, or even weight. That made it highly interesting for me to use as a surface. You can destroy money but you can’t destroy the belief in it. That’s extremely valuable as a concept. So anything you put on that surface elevates itself because there is already a foundation. You don’t have that on a canvas. Relying on these concepts, Reuven Schockner devised a system of words, quotes and logos.

Although elements of his practice were already familiar to art historians and pundits, RYR still managed to develop his art down a unique path that turned his work into one of a kind

What RYR Brings to the Table

Although many artists that initially started out as graffiti authors eventually turned towards more gallery-oriented types of pieces, not many of them have evolved into such a unique and original artist as Reuven Schockner did. His system of quotes, logos and original concepts is a true refreshment to his national scene that already felt the artistic earthquake of his emergence. Furthermore, everything RYR creates is underlined by a strong tendency not to overly explain the idea behind the piece, a feature which adds a enchanting note to his work as we are completely free to interpret it in any way we see fit.