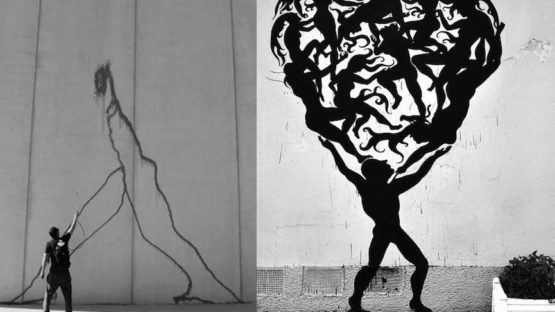 Sam3 is a Spanish artist whose artwork is ironical, poetic, inspiring, but also provocative and challenging. Sam3 is well known for his large scale black and white paintings that remind of silhouettes or shadows. The reduction of colors and clear simple shapes caused by their intense presence builds the focus of his paintings and turns them into a magnet for the observer. Sometimes they even take the space of the whole house wall and refer to the urban surrounding.

Born in Elche, Spain, Sam3 currently lives and works in Madrid. His large street murals are certainly hard to miss and can be found across Europe.

His works are dominated by figurative elements, which are in the state of metamorphosis. An important element of SAM 3’s oeuvre are phantasmagorical roots growing out of the bodies of his protagonists.

His urban interventions are comparable to epigrams illustrated in a satirical style of symbolic literature, many of which were on display in the city, engraved on ephemeral architecture so as to exhibit publically questions that effect the community. Maybe his compositions are cleaner, his shapes more voluptuous than those impenetrable older traditions, but the meaning is the same: we must ask ourselves about the status quo and make way for a new enigma.