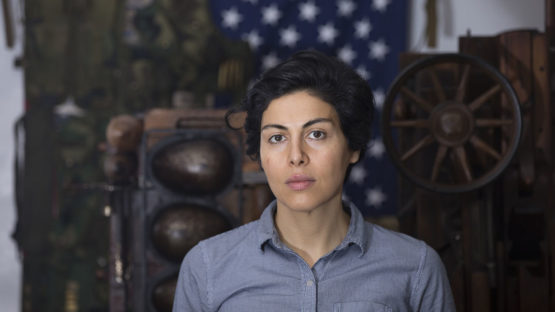 Sara Rahbar is an American mixed media artist, whose work is quite versatile – it includes photography, sculpture, and installation, while her main source of inspiration are her personal experiences as well as her thoughts on human condition. In the early 80s, Rahbar and her family moved from Iran to the United States, looking for a better life during the Iranian Revolution. Rahbar found her home in New York City, where she lives and creates mostly sculptural pieces in bronze nowadays.

Rahbar was born in Tehran, Iran in the late 70s and after she moved to the United States, she attended an interdisciplinary program at the Fashion Institute of Technology in New York. She also studied at Central Saint Martins College of Art and Design in London. Already around the end of midterm at her school in London, Rahbar started working on her Flag Series, which brought her the international reputation later. In this series, Rahbar combines various traditional Iranian fabrics with national symbols, such as American flag.  While playing with symbols and fabrics, she explores the topics of identity, belonging as well as the presence of violence and confusion in nowadays world. So far, Rahbar has created more than 50 very diverse flags.

So far, Rahbar has created more than 50 very diverse flags

Exploring Realms of Memory and History

Rahbar’s other series, such as 206 Bones, War, Love Letters, and Confessions explore the division between the realm of personal memory and the actual history. Also, her work belongs to the left-wing democratic movement and it represents a resistance against the capitalist system we’re living in. When it comes to Rahbar’s techniques and materials, she works with many different types of textiles, wood, bronze and found objects. The first textile she was working with was the American flag, but later on she moved to different materials, such as military and army textiles, as well as canvas tarps. Rahbar claims that she has a strong passion for piecing and attaching things together, perhaps because her life included a lot of uncertainties and watching things fall apart. She has an unquenchable thirst to understand the omnipresent human need for belonging and love.

When it comes to Rahbar’s techniques and materials, she works with different types of textiles, wood, bronze, and found objects

Rahbar’s work is mixing her own memories and ideological symbols and in such way deconstructing the artist’s personal history and creating a raw and honest perspective on important universal issues, such as the human condition – love, pain, violence, uncertainties, and fear. Her perspective is almost like a direct dialogue with her audience, due to the strong emotional content of her pieces. Rahbar’s powerful work has been shown internationally and it is the part of many eminent permanent collections, such as Centre Pompidou in Paris, Saatchi Gallery in London and Taiwan National Museum of Fine Arts, to name a few.