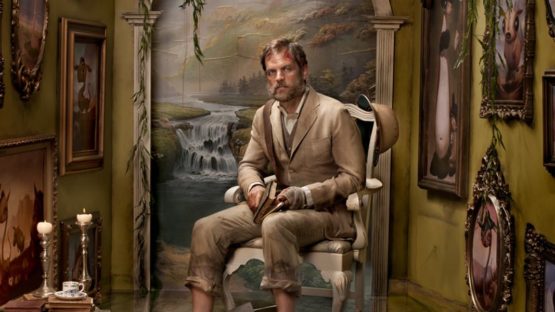 Scott was born in 1966 and he earned his BFA in illustration and painting from Columbus College of Art and Design in Columbus, Ohio. After that, Musgrove was settled in Seattle where he earned his living drawing comic books for Fantagraphics Books and Dark Horse Comics. His next stop was Los Angeles where he worked on TV series titled Fat Dog Mendoza for Cartoon Network Europe, Sony Wonder and Sunbrow Entertainment.

After a while, Scott went back to Seattle in order to devote all of his time to illustration and painting. Very soon, Musgrove created a name in an art world by presenting his strong imagination through depicting extinct animal species in a wild worlds they inhabited. This incredible zoology was accompanied by his artistic expertise in executing artworks in oil. Scott’s technical proficiency and fantastical creativity managed to blend in a bizarre worlds of comic books characters in surreal landscapes he creates. But, this artist does not stop on canvas. In his studio, Scott recreated all the species of animals he painted – in sculptures, in wood or bronze.

Musgrove published a postcard set titled How is the Empire as well as the book The Late Fauna of Early North America where he presented previously undiscovered animals in a dedicated and scientifically un-approved practice of zoological impressionism.

Musgrove is represented by Jonathan LeVine Gallery from New York.