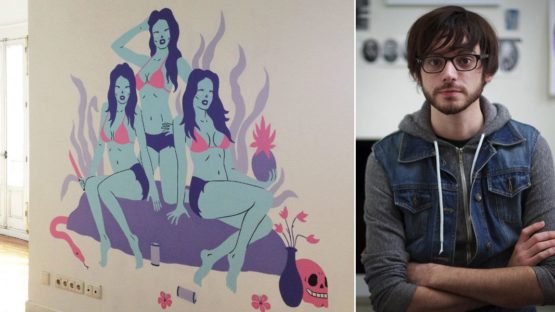 Sean Morris is a Perth-born artist and illustrator, currently based in Melbourne. He works across a range of mediums, including comic-inspired digital drawings, pencils, watercolors, acrylics and the occasional aerosol mural.

Morris was born in Perth and lived there until 2013, before moving to Melbourne. He originally studied creative advertising at a university in Perth, and then went on to study an animation diploma at the Film And Television Institute in Fremantle. Although he got some good things out of each course, at the end of four years he found himself out in the world with no real desire to work in either of those industries. The fact that he comes from a disconnected city in West Australia, where the art scene is more disjointed than it should be in a small city, forced him to work harder and surround himself with a strong unit of people who make world class stuff.

With no formal education in drawing or illustration, his style devolved over time, from the more realistic figures he was drawing when starting out, to now not-so-beautiful, nor traditional, characters in his works. Sometimes grotesque and sometimes beautiful, these characters are curious studies of outsider living, and high-brow tributes to alleged low-culture. Trash culture is a common trope through the work of Sean Morris, shaped by his affection of drawing attention to the little physical imperfections that absolutely everyone has. His work also carries in it elements, be they pop sensibilities, or iconography, that everyone can relate to. Looking under the skin of our metropolistic culture for gems of uniqueness, the scenarios and characters that his work portrays hold their own attraction, leaving a viewer torn between curiosity and the desire to avert their eyes and look away.

Balancing both the art and illustration paths, commercial illustration has been a little soul-crushing at times for Morris, caused by specific rules and regulations of moneymaking world. Although there were periods where commercial work has been extremely rewarding for the artist, on both a creative and financial level, Morris’ focus is primary on art shows, and fashion work based on his art.

Between 2012 and 2014, he curated three large group exhibitions under the Magic Weirdos banner – in Perth, London, and Melbourne. His artwork has been featured in publications on five continents, and he has illustrated for The New York Times, Mambo, Addict Clothing, The Portland Mercury, Wooden Toy Quarterly and Little White Lies Magazine. He has held solo exhibitions in Perth, Melbourne, London and Madrid, and participated in around fifty group exhibitions.