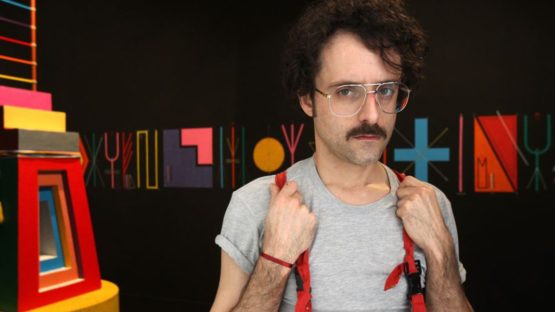 Sergio Hidalgo Paredes, aka Sixe Paredes, is a Spanish contemporary artist born in San Andres, Barcelona in 1975. His colorful paintings, rich in sensitivity, are a balanced mix of abstract and figurative art, a universe endowed with vivid shapes and symbols, depicting simplicity and complexity at the same time.

Sixe Paredes, formerly known as Sixeart, started scrawling his name on the walls of his native Barcelona, in the late ’80s, when graffiti was still a novelty in Spain. Despite lacking a formal artistic training, he decided to add a paintbrush and canvas to his usual tools, leading to great effect. In the mid-90s he also developed his multidisciplinary talents in the fields of sculpture and studio painting.

Incorporating signs that leads the viewer into his imaginary world inspired by the urban landscape, the city’s melancholy and the romanticism for the world that’s left behind, Sixe’s approach is full of bright, bold bursts of color and geometric patterns which depict the primordial life of ancestors. All in his signature Surrealist style, much like the street art for which Sixe is famed, his works merge tradition and modernity. His psychedelic multicolored abstractions are like the images lost in the passage of time, powerful compositions depicting ancient creatures and fictitious ancestors.

Influenced and inspired by folk art and art brut, but reinterpreting it for a modern generation, Sixe has named this approach as ‘ancestral futurism’. His exhibition Futurismo Ancestral: An Offering to Peru by Sixe Paredes featured 25 large-scale works including tapestries, totem sculptures, ceramics and quipus – a system of knotted cords developed by the Incas to communicate and record important information, otherwise known as ‘talking knots’ – and some smaller-scale works such as masks and chichas, hand-drawn posters decorated with fluorescent inks. Sixe is reinventing an idea of ancestral reconnection by creating his own pictorial language, transforming the original forms to more abstract symbolic elements.

In order to fully experience and give homage to Peruvian and Andean aesthetics, since 2009 Sixe has spent periods in Peru to engage with and enrich his knowledge of these art and culture. He has collaborated with the creative community in the region and has learnt about the local art traditions and techniques from celebrated ceramicists, chicha artists and weavers. In 2008, Sixe was one of six international artists invited by Tate Modern to paint its river façade for the first time. He belongs to the collective El Equipo Plástico, with the artists Nuria Mora, Nano4814 and Eltono.

Sixe’s surrealist, childlike style struck a chord with audiences and art collectors the world over. Today, he is being mentioned and exhibited together with the likes of Joan Miró and Antoni Tàpies. He is currently living and creating in his hometown, Barcelona.