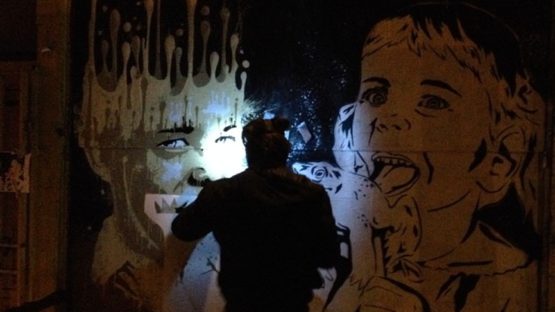 Sr. X was born at the beginning of the 80’s in a small town in the north of Spain. After following several Arts degrees, he started to bring his ideas to the street trying to get city people to stop, think or just smile for a moment when they saw his work, briefly forgetting their daily routine.

Some of his inspirations are pop culture, films, publicity and urban legends, which he normally gives expression to through stencils, paste-ups or installations. His creations are often wrapped in a distinct tone of irony and social criticism, frequently shrouded by a veil of sharp humor.

In addition to his work in the streets, he likes to experiment with mixing street art techniques and more traditional elements such as acrylics, oil and collage in his studio, bringing his canvas creations one step forward with a more polished and elaborated process.

He has participated in numerous art festivals, exhibitions and projects, and he enjoys leaving some of his work in the cities he visits.