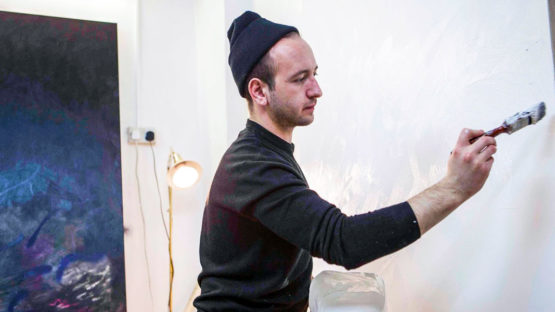 Steven Cox is a contemporary painter whose work is based on investigating and deconstructing elements that surround formalism and structuralism. His approach includes a genuine interest in color, contrast, materiality, process, and surface but he also incorporates unconventional and destructive processes that in a certain way weaken the intrinsic nature of painting.

Steven was born in Aberdeen in 1986. He got his BA in Fine Art, Painting in particular at the Duncan of Jordanstone College of Art and Design in Dundee and three years later obtain a master degree in Arts, at the Contemporary Art Theory & Gallery Curating at Edinburgh College of Art in Edinburgh.

Since his early age Steven was infatuated with drawing and painting. As an undergraduate student, he researched the topic of painting, traveled to Berlin, Leipzig, New York and Italy and even was appointed as a painting teacher in the US, as he spent the summer there. Leipzig influenced him the most due his infatuation with Kippenberger.

One of his strongest influences is definitely Robert Burns and his collection of poems, a book Steven proudly owns. Cox admitted her returned to the book over and over and realized that the pattern is repeating itself. The reason behind his constant returning was the desire to read the true Scottish language. As he said in one of his interviews:” It is difficult to parallel the texts to anything else, particularly because Robert Burns was taught to me when I was only 8 years old when in primary school so I feel an affinity to his writings. His poems also have a huge cultural value, though it is difficult to avoid Robert Burns when living in Scotland. His face is/was on our currency, and as a figure, he regularly represents Scotland in many ways. “In one of his exhibitions which took place in 2014 he painted the pictures to form a personal response to Robert Burns as a poet, but also to investigate the notion and the significance of the language within painting. Steven strongly believes that paintings possess their own language and each painting is a visual equivalent to a written word.