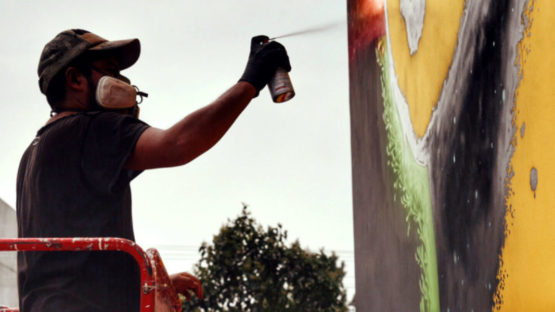 Always carrying the camera with him, Stinkfish likes to take pictures of the unknown random people that he later transfers into stencils, decorating the old walls around the globe. He became recognizable for his brightly colored portraits of complete strangers displayed on the streets of numerous cities, starting from his hometown Bogotá. Using mostly discarded photographs, the artist reinvents his characters through distinctive expression, giving to their faces a brand new life – with psychedelic themes and elements. Believing that street art holds no limits by giving anyone opportunity to participate, Stinkfish captures the moments of humanity, leaving the interpretation to the public.

Stinkfish and his Graffiti Styles

Born in Mexico he spent his childhood in Colombia where his parents have migrated. As a child, he used to wonder around the streets of Bogotá, discovering his surroundings. Stinkfish believes that it’s in the human nature to keep trying and intervene on its habitat, leaving some kind of personal mark. For this artist, the street is a space for coexisting and sharing, just to transgress and opt for another form of communication between people. The most important part is the irrelevance of the contemporary society concept where consumerism plays the main role. That is why he had joined a group of individuals with similar philosophy and interests. This group of people was interested in painting the streets illegally, criticizing the commercialization of graffiti by and while doing it. Stinkfish bases his concept of work on the independence which is crucial for the creative form of graffiti. That is why he avoids the collaboration with institutions because as he says, once given the permission to intervene on the street – illegality, the very nature of graffiti is jeopardized. He sees it as an opportunity to transmit a forceful social message like no other: here I am and I exist, painting these streets when I want and how I want. This spontaneous expression, direct and free, is important for understanding a personal memory as well as collective, the one that lives on in the “hoods”, cities and countries, on a larger scale. His stencil beginnings occurred during the 2000-2001, but in 2003 he for the first time made complex work representing John F. Kennedy Jr. saluting the body of his father as the reminiscent of his murder. When he was seventeen, he started to tag Stink and later added the Fish to his name. He explains his choice with the influences of the punk music he listened during that time.

Always in a quest for the perfect location, Stinkfish prefers to be visible, choosing places with a high traffic and walls of a specific texture, old ones with the cracks and moisture. It is also very important to find the appropriate neighborhood, where people live, not the business part of the city. Admiring the several names of the current street artists such as El Mac, Roid, Bastardilla, Nunca, Insa, Katsu, Faile, and Nazza Stencil, among the others, he is not hesitating to admit that he finds the inspiration in the work of his friends Lorenzo, Masnah, Saks, Buytronick, Mecamutanterio, Seimiek, Soft, Anger, Zas, Malk, and Onesto.

The artist is represented by BC Gallery, 999 Contemporary, Gregg Shienbaum Fine Art Miami, and Vertical Gallery.