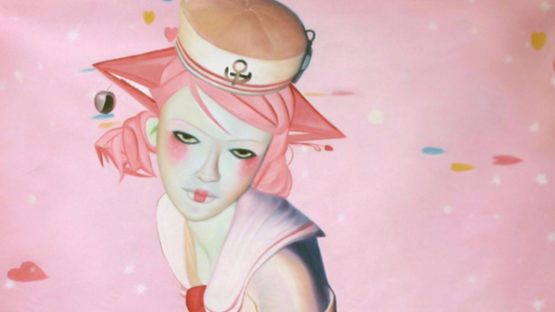 When examining the work of Sumomo Kanashiwa, it is clear that Argentina-based artist and illustrator is heavily inspired by Japanese manga and animation culture, with her wide-eyed and striking – mostly female – subjects. Despite being influenced by Japan’s comic art, Kanashiwa’s style has its own original flair and charm that distinguishes her art from the work of others. Pink haired, beautiful girls with unusual blue-gray skin tone, often placed in the surreal settings, became the recurring motifs in her paintings.

Believability and Originality in Kanashiwa’s Work

Having never formally studied art before, Kanashiwa began her artistic career as a self-taught painter in the mid-2000s, in Buenos Aires, one of the most diverse cities in Latin America. Although Argentina has its own tradition of comics, Kanashiwa’s illustrative style is primarily influenced by her Japanese heritage. The highly talented artist uses intense colors to bring believability and originality to her wistful characters that look like they are lost in their own thoughts and in their own world like in her pieces Thinking About (2009), Pool (2008), and 13593 (2008).

Sumomo Kanashiwa studied Design School and Computer Graphics, and upon graduation she decided to focus all of her talents on creating oil paintings highly influenced by manga, anime, cartoons, video games, and books. Aged 30, she has exhibited her work in various exhibitions worldwide. Her work revolves around the pink-haired girls who tend to be innocent and naïve, but at the same time provocative and seductive.

Featured image: Sumomo Kanashiwa – On the Floor (detail), 2008
All images courtesy of the artist and Galerie Jacob Paulett