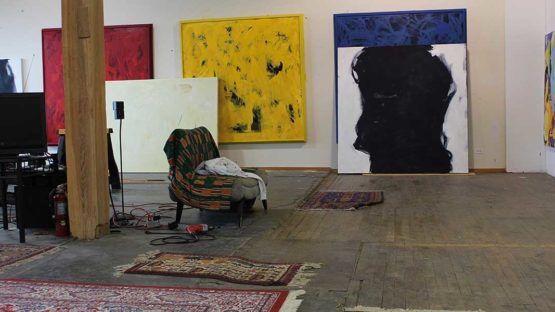 Ted Stanuga is an American artist whose painting is gestural abstraction with drawing based in the nature of things.

Stanuga was born and grew up in Chula Vista, less than two miles away from the colorful, Mexican Tijuana, where artists created velvet landscapes they sold along the side of the road. On the other side, in conservative Chula Vista environment, most of its artists derided abstract expressionism as pure nonsense. Between these two dissimilarities, Stanuga nurtured his artistic aspirations.

After graduating from high school and serving in the Marines, Ted attended the School of the Art Institute of Chicago in 1973, but did not linger long enough to earn a degree. Instead, he pursued an artistic career on his own terms. Fortunately, Ted studied under the professor Tom Kapsalis who helped Ted to master the craft. When he left the school, Ted went straight to Landfall Press to work with Master Printer Jack Lemon. He mixed colors for the artists, learned about process by watching the artist and his apprentices.

Today, his studio in Garfield Park is a place where he produces oversized canvases, some black and white, some with an almost explosive use of color. B&W series started originally with an idea from Duke Ellington and his Black and Tan Fantasy compositions.

As he says, in his artist’s statement, the larger works are as much about experiencing them while passing in front as they are being viewed frontally. The enveloping size creates its intimacy, Ted believes.
Ted Stanuga’s painting suggests unknown rhythms – introspective gestures direct the viewer through these hallucinatory mindscapes.

As far as for the technique, after the drawing is once done and fixed, Ted begins to work into the charcoal with white or ground color, going through a general simplification process by obliterating lines with light or paint. Once that coat is completed the artist sands it smooth, he also begins to redraw in various shades of the same colors with oil, leaving aspects of previous layers visible.