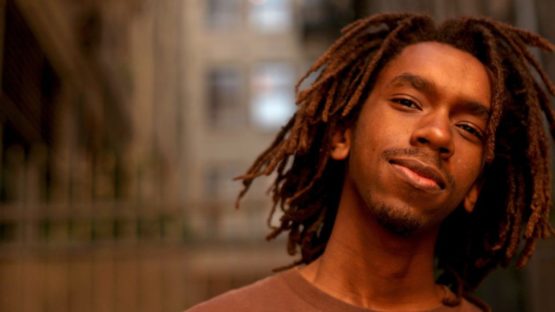 Mtendere Mandowa, or Teebs as he is better known, is an American producer, painter, and contributing member of the noted LA based Brainfeeder record label. He began painting in 2005 and started making music shortly thereafter, both by himself and as part of a collective known as My Hollow Drum. The parallels between Teebs’ visual and audio art are noticeable, particularly the vibrant, iridescent, whimsical and dreamlike elements that appear on the surface.

Born in the Bronx, New York with Malawi and Barbados origins, Mandowa bounced around the East Coast living in both Georgia and Connecticut before finally landing in the affable LA suburb of Chino Hills. It was here that he began to attune his sonic and visual languages in the solitary of his mother’s two car garage. Early in his musical pursuits, Teebs joined a group of like-minded friends and producers who went by the name My Hollow Drum. Within this crew, he was able to build new ideas, share works and perfect his production craft. Intrigued with what was going on in Los Angeles’ evolving electronic scene, he never expected to fall directly into it. He began interning for the acclaimed online radio stream, Dublab. This sparked his self-expression, spirit and growth as an artist, being around music, art and a creative atmosphere while brushing shoulders with the artists he admired from the area.

Teebs as a painter

Through great focus and vision, Teebs made a name for himself as a skilled painter. His painting practice bares much relation to his music production – collaging, overlapping, and mixing imagery with painted gesture to create meditative and minimalist visual soundscapes. The work emanates a sense of organic appeal with feelings of warmth and movement similar to that of his music.
His artwork found canvases of all form, from walls to record covers, imbued with vibrant color, energy, and shape. Distinctive in his work are what he calls floaters, the circular masses that often appear in his work and can be seen on the Ardour cover. Teebs uses mixed media in his work – such as charcoal, spray paint, collage, stencil, and various applications of paint. A proportion of his work is based on vinyl records or the 12 inch square format, and he has been known to paint onto old records or vinyl sleeves, sometimes even using records as medium for a piece. He also works at a larger-scale on wood.

In 2008, he was invited to Barcelona, Spain and selected to participate the annual Red Bull Music Academy (RBMA). His growth and experience there prompted fellow RBMA alum Flying Lotus to seek out Mandowa and within months Teebs was living and working in close proximity of both Flying Lotus and fellow LA beatmaker Samiyam. Since this time Teebs has toured the globe and released Ardour and Estara, two full-length albums under the Brainfeeder label with much success and acclaim. Following the release of his much anticipated sophomore album Estara, Mtendere began to redirect his creative focus into completing the body of work that would later be exhibited in his solo show titled Overgrown.

Teebs is currently based in Los Angeles.