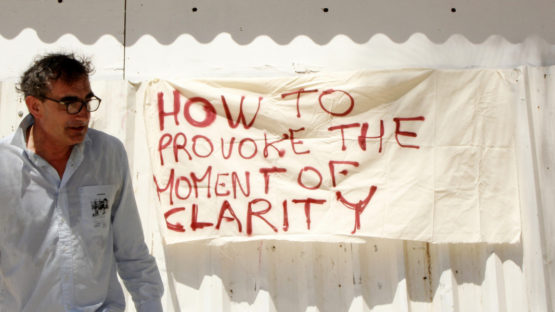 The vision of creating awareness about dysfunctions in the world through art is the driving force behind artistic praxis of Thierry Geoffroy, a French-Danish conceptual artist also known as Colonel. As the format of the artwork is the artwork, he refers to his work as format art. He has since 1988 been working with formats that can support the production and presentation of artworks produced in the now. Ultrafast, one of the earliest, provided a setting for a line of exhibitions that were changing in different ways. Either they were moving in space, for example, exhibitions on clothes of people who are moving; or they were changing in the same place but with newer artworks daily replacing the old ones.

The ultrafast pulsing way of working is related not only to velocity but also with time. This is the main reason why Colonel later introduced another term, Ultracontemporary, which links more to the notion of time and carries on a critical positioning to the established understanding of contemporary arts. In order to fully understand this type of approach, we need to break down the word itself – the contemporaneity is an interesting phenomenon because it forces us to make a connection between the time and us. Originating in Latin (con meaning “with” and temporaries meaning “of time/ time”), “with time” is alluding some kind of togetherness or closeness to the present moment, and to express the term would mean to express about a subject matter while still involved within it. However, the understanding of the term contemporary is quite loose, and now it covers much wider time span, even pieces made in 20th century, or even by the artists that are still alive – completely independent of the term’s pertinence for the present moment. By adding the word Ultra, the artist emphasized and created a new term, bringing the time aspect into the focus and insisting on contemporary being in the now. Apart from the velocity and time, the artist also focuses on the content, which, too, has to be in the now, relating to what is happening in the world at the moment, acknowledging the existence of many burning topics that need to be addressed on the spot or it becomes too late. This is what Geoffroy calls Emergency Art – it results in pieces produced by artists who are alert, who are able to recognize dysfunctions and grab the most urgent ones that simply cannot wait to be expressed about. Similarly to the hospital situations where doctors have to prioritize between the different patients based on the level of emergency, the artists also have to rank the emergencies.

Other Formats and Recent Works

The Penetration is an artist’s act of placing a piece within another artist’s exhibition, creating a solution that helps in avoiding the lateness of bureaucratic artistic institutions, but also beneficial collaborations, a feature Colonel is widely known for. This format has been seen at the Athens Biennial Emergency Room, at the Istanbul Biennial, at the Venice Biennial in 2007 (by Biennalist), at the Venice Biennial in 2009. Extracteur involves sending a person to create a photographic collection of personal experience (it was first used during the 2011 Venice Biennale). Biennalist concurrently comments on active biennales and managed cultural events through group discussion. Recent Works, the artist’s latest solo show, once again twists the concepts of time by introducing a new term – the recent. Neither the present nor the past, neither being in the now nor being too late – it is a new category for Geoffroy. The show will feature pieces from the last couple of weeks next to a couple of older works, all of them once being ultracontemporary emergency artworks. Today, some of them still have relevance and deal with problems that could still be solved. The others deal with actions and decisions that are already taken and which are too late to change. Being a very delicate and interesting space and framework, the recent gives certain flexibility to the precision. However, in order to avoid the failure of adequately acting upon, the artist needs to be in advance. To be avant-garde. With his instinctive approach and critical eye, Geoffroy’s work is about now but also about future. Some of the pieces have this ability – they not exactly prophetic, but could certainly be observed as a predictive way of communication through artistic means.

Featured image: Thierry Geoffroy with one of his works
All images courtesy of the artist