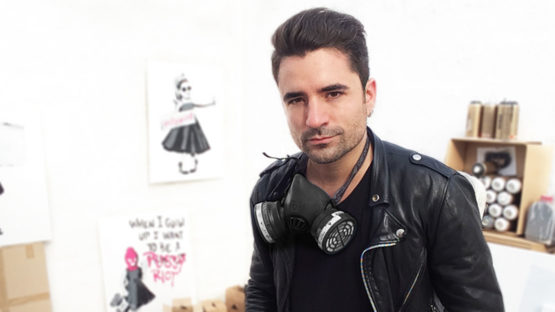 With work mainly consisting of making satirical comments about society, politics and consumerism, Thirsty Bstrd, also known as Julien Surdeau, is a French contemporary artist who uses spray paint, stencils, stickers and videos to describe the world around himself. By using powerful symbols and popular images and making them look funny or weird, he’s actually trying to provoke and generate an emotion. Apart from pop culture iconography, his artworks are also packed with a variety of humorous statements, as Bstrd elaborates: “As a spectator, I have no interest in art that is not clearly legible or without an underlying purpose. I like art when it’s relevant and fun. Humor is part of how I express myself. I prefer criticism when it’s done with a humorous note. What I love the most in humor is the parody! It’s probably my biggest inspiration. I grew up with Mel Brooks and the Naked Gun movies.”[1]

The Art of Thirsty Bstrd

Born in Paris, Thirsty Bstrd was the artistic director of his own creative agency from 2011 to 2015. Speaking of his upbringing, he said: “I’m a self-taught artist. I have been drawing in a spontaneous way since childhood. I’ve always had something to say about the surrounding world, whether by drawing, writing or filming. I ran a creative agency for six years in Paris. By my own initiative, I organized numerous urban art exhibitions in Paris and Los Angeles, while showing my own art at every opportunity. I was constantly thinking about my art projects. I finally decided to something about it. So I left my day job and found my place in the art world.” As for going through different processes in order to find his personal style, the artist states: “I started using stencils and spray cans as a result of hanging out with urban artists while I was curating art events. I gained knowledge on the right way to create a stencil, which spray cans to use, etc. I like the artists that use it to express their humor. It was meant to be.”[2]

Some things are just meant to be. The collaboration between Thirsty Bstrd and Addicted Art Gallery was one of those things. It all began on social media, as they followed each other on Instagram. It would be hard to meet otherwise since he is based in Paris while the gallery is in Singapore. The collaboration resulted in Fast Food Monkey series of prints, and it is based on one of his previous works which features a chimp in a cage eating McDonald’s burger and fries with a sign Please do not feed the monkeys. “The idea came from my love of making fun of signs with a contrast between the ban and the situation, with an allusion to junk food. As people kept talking to me about this monkey, he finally became a true character to me. So I decided to extract the character from the piece and give him his own story as the Fast Food Monkey. He’s now a free animal, enjoying his meal.” But, being a child of consumerism and having grown up with consumerism as a culture, the artist somehow admits defeat: “We all know that we shouldn’t feed the animals at the zoo as we stand there staring at them trapped in their cages. We’re not imprisoned like they are, yet we feed our kids and ourselves fast food and all other sorts of junk.”

On Being a Curator and His Plans for the Future

He worked as a curator in his own initiative. Having started a creative agency in Paris, he wanted to highlight creativity through various events. It was always about creating projects, with the difference being that “dealing with people is tougher than dealing with yourself!” So he decided to focus on his own art since there was too much stuff in his mind. “Being an artist is more important for me. But I still have ideas for group projects!” As for the future, Bstrd’s plans at the moment are focused on the next several months. In December 2016, his work will be featured at Spectrum Art Fair during Miami Art Basel. He also has a group exhibition in January at Krause Gallery in New York, and his stickers will be included in the DC Street Sticker Expo, a crazy group show of thousands of stickers at The Fridge DC in Washington DC.