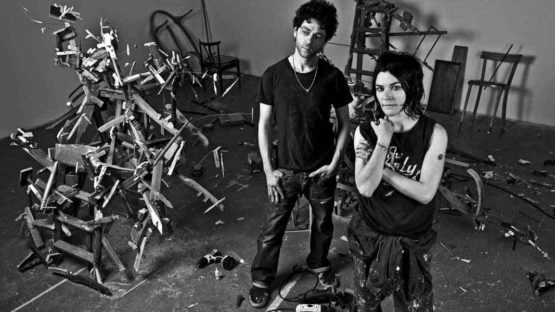 Timothy “Tim” Noble and Susan “Sue” Webster, are two British artists who work as a collaborative duo, and are associated with the post-YBA generation of artists. Tim Noble and Sue Webster take ordinary things including rubbish, to make assemblages and then point light to create projected shadows which show a great likeness to something identifiable including self-portraits. The art of projection is emblematic of transformative art. The process of transformation, from discarded waste, scrap metal or even taxidermy creatures to a recognizable image, echoes the idea of ‘perceptual psychology’ a form of evaluation used for psychological patients. Noble and Webster are familiar with this process and how people evaluate abstract forms. Throughout their careers they have played with the idea of how humans perceive abstract images and define them with meaning. The result is surprising and powerful as it redefines how abstract forms can transform into figurative ones.

Parallel to their shadow investigations, Noble and Webster have created a series of light sculptures that reference iconic pop culture symbols represented in the form of shop-front-type signage and carnival shows inherent of British seaside towns, Las Vegas and Times Square. With the aid of complex light sequencing these signs perpetually flash and spiral out messages of everlasting love, and hate.

Noble & Webster have created a remarkable group of anti-monuments in their eighteen-year career, mixing the strategies of modern sculpture and the attitude of punk to make art from anti-art. Their work derives much of its power from its fusion of opposites, form and anti-form, high culture and anti-culture, male and female, craft and rubbish, sex and violence.

In 2009, Noble & Webster were awarded Honorary Degrees of Doctor of Art at Nottingham Trent University in recognition of their contribution to contemporary British Art and their radical influence on younger generations of artists. In 2007, they were awarded the ARKEN Prize at Arken, Museum of Modern Art, Copenhagen for outstanding contribution to the international scene of contemporary art, in the same year their critically acclaimed project Polymorphous Perverse at the Freud Museum was nominated for the prestigious South Bank Prize.

Toxic Schizophrenia (Hyper Version) their first permanent public sculpture was unveiled at Museum of Contemporary Art, Denver, May 2009. Previously the public art installation Electric Fountain, was exhibited at Rockefeller Plaza, New York, February 2008. In 2009 the Trustees of the National Portrait Gallery selected The Head of Isabella Blow for inclusion to its permanent collection.

Since their first solo show in London, British Rubbish in 1996, Noble & Webster have enjoyed international recognition with solo exhibitions at Rockefeller Plaza, New York, 2008, The Freud Museum, London, 2006, CAC Malaga, 2005, Museum of Fine Arts, Boston, 2004, P.S.1/MoMA, New York, 2003, Milton Keynes Gallery, UK, 2002, Deste Foundation, Athens, 2000 and The Chisenhale Gallery, London, 1999. Their work was included in Statuephilia—Contemporary Sculptors at The British Museum, London in 2008–09 and in the exhibition Apocalypse—Beauty and Horror in Contemporary Art, at The Royal Academy, London, 2000.