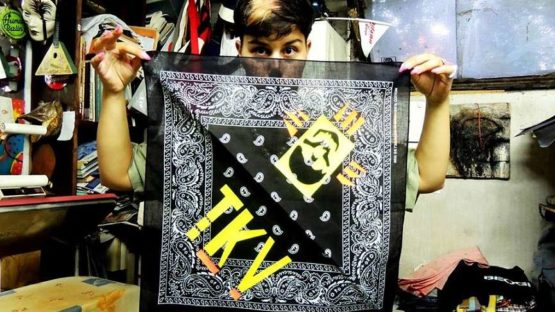 TKV is a Serbian street artist born 1988 in Belgrade who has, during the period of ten years, become a true street art legend. In 2004, at the age of 16, walking the streets of Rome with her dad, he suggested his daughter should perhaps start doing stencils as the ones they saw. She liked the idea, and she did her first stencil there. After coming back to Belgrade, she was already ‘infected’ and decided to continue doing it. It became some kind of an infatuation that doesn’t let go. Being a female in the street art usually created a lot of prejudices among the people, but it TKV’s case, it mostly helped her. She was easily stood out from the big crowd of men and, when it comes to the police matter, she usually isn’t being perceived as a threat.

The artist uses the public space as a place where it takes an act of creation, and thus unifies the exhibition space and their personal vision of public space in one. The right to public space and the creation of the city seems to have been the essential part of this kind of art and thought-provoking that they are places that allow for intervention and change.

She uses the stencil technique, the simplest form of printing, where the spray paint applied to the surface through the negative cut from plastic sheets. Her stencils picturing strong women, cats, Indian based topics, movie characters and much more are beautifying the city for 10 years now.

TKV literally made a business out of hobby. In June, she was in Barcelona, ​​doing some interior stores, mass cafes and restaurants, a bunch of workshops, people call her to draw in their homes … “I can not imagine the moment when i stop doing this. I like to sneak in the street and hide, it’s great. ”

According to TKV, today she sees maturity in her technique, the approach to the whole thing and in terms of themes and ideas: “When I was younger, my only goal was to do as much and as crazier I could, but now I’m not doing as much but it’s exactly what I want”