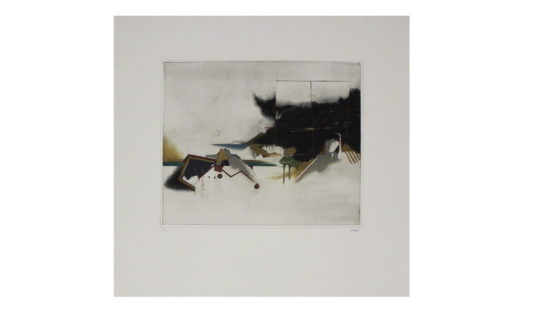 Tuvia Beeri is born in 1929 in Czechoslovakia. Beeri immigrated to Israel in 1948. He studied in 1957 at the Oranim Art Institute in Qiryat Tivon, with Marcel Janco and Yaakov Wexler and from 1961 to 1963 with Johnny Friedlaender at the École des Beaux-Arts in Paris. In 1963 he returned to Israel to teach at the Bezalel Academy of Art and Design in Jerusalem and from 1964 also etching at the Avni Institute in Tel Aviv. In 2001 he won the Eli Oshorov Prize for contribution to Israeli Art from the Israeli Painters and Sculptors Association (IPSA). Beeri has a meticulous care for detail while creating and destructing, exploding and merging luminous compositions of geometrical shapes in a personal language of form and color. Beeri had exhibitions in the US, Canada, South America, Australia, Germany, France and Israel.