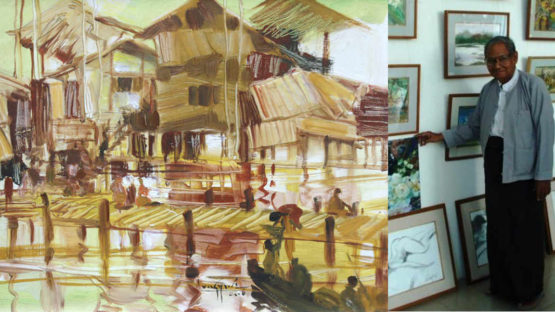 U Lun Gywe, born in 1930, is one of the most well-known and well-respected artists in Myanmar today. His aesthetic sensibilities combine French Impressionism, Oriental roots and his own Burmese heritage. He graduated from the Art Institute of Teacher’s Training in 1954, and continued his studies under famous artists such as U Thet Win, U Chit Maung, U San Win, U Thein Han and U Ngwe Gaing.

U Lun Gywe was an instructor at the State School of Fine Arts, Yangon, from 1958 to 1977, principal of this school from 1977 to 1979, and taught at the Fine Art association the University of Rangoon between 1960 and 1979. He studied in China in 1964, and was awarded a fellowship in art restoration to East Germany in 1971. His year-long stay in China had a strong influence, and he incorporated the Chinese brush and ink techniques into his oils and watercolors.

“I paint according to my emotions”, says the artist, “drawing inspiration from smell and textures, light and shadow”. At the centre of U Lun Gywe’s work is a focus on the female form, and in particular the beauty of females dancing, taking a bath or preparing their traditional Myanmar thanaka makeup.  Although U Lun Gywe paints other subject matters, he always returns to his favourite subject with a vision of female beauty.

He exhibits regularly in Myanmar and has participated in several art exhibitions abroad, such as in Japan, Korea, Australia, USA, Singapore, and Thailand. His works are found in the public collections of the National Museum of Myanmar, the National Art Gallery of Malaysia and Singapore Art Museum.