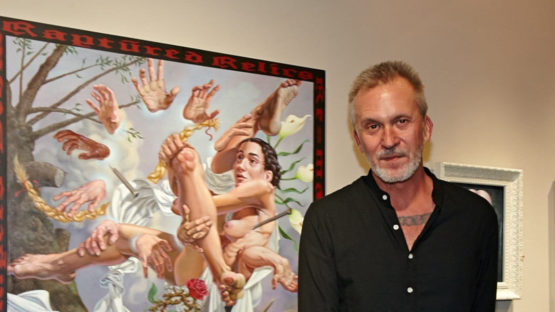 When even the angels give up on their perfection, when the bodies of ordinary humans become twisted and almost inhumane, Van Arno, an American artist, finds a place for his art. Sickened of the flawless, he seeks to break the rules of anatomy, physics, even lighting and gravity, so his pieces could gain the level of excitement and aliveness that simply not present in something perfect. He started as an illustrator, but made a transition into painting, becoming interested in the icons of history and culture. His pieces are sometimes considered provocative as he also tackles the elements of religion and paints as he perceives it.

His style can be described as a step forward from Mannerism. When people became bored with the harmonious classicism and the idealized naturalism of High Renaissance art, the movement made its introduction. Mannerism’s style is characterized by artificiality and artiness with the highest value being placed upon the apparently effortless solution of intricate artistic problems, such as the portrayal of the nude in complex and artificial poses. Arno takes this a step further, creating something that could be understood as the Uber-Mannerism, where he pushes the human figure into the extreme postures, using highly unusual designs and vivid colors.

Arno was born in Chattanooga, Tennessee but grew up in St. Louis, Missouri. He studied under Lita Albuquerque and Carol Caroompas at the Otis Parsons School of Design in Los Angeles. His illustrations found their way onto the video game box art, nightclub posters, and album covers. Then, in the late 80’s, he became interested in the icons of the culture and history, so he made a transition into the painting. His range of characters is immense, varying from J.F.K. to Othello, Herman Goering, St. Francis, and Joan of Arc. In the recent years, Arno mixed his obsession with religion with the American history. Actually, he uses religious stories and symbols to evaluate and re-examine the American values.

Where Are The Limits?

There are no lines Arno will not cross in his pursuit of the limits of the human body, and humanity in general. He explores our history, present, our religious beliefs, often painting angels and saints, sometimes even making them up. There may be some controversy revolving around his art but is unnecessary, as he only tries to find out who we really are and who’ve been. No matter what the subject is, his focus remains on the figure, and Arno knows that his paintings have the power to engage the viewers.

He is represented by Corey Helford Gallery in Los Angeles.