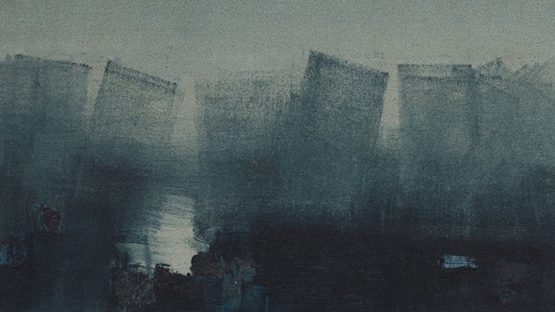 Vasudeo S. Gaitonde was one of India’s most prominent abstract artists. Self-critical and confident, Gaitonde scorned sentimentality in his biography and his artistic practice. There’s a very strong correlation between the way Gaitonde thought, the way he lived, and the way he painted. His practice began in the late 1950s in a nonrepresentational mode – or, as he preferred to call it, a nonobjective style.

Gaitonde was born in Maharashtra, India, in 1924. The artist graduated from the J.J. School of Art, Bombay (Mumbai), in 1948. Shortly after he became associated with the Progressive Artists’ Group founded in 1947 by artists K.H. Ara, S.K. Bakre, H.A. Gade, M.F. Hussain, S.H. Raza, and F.N. Souza. The group, based in Mumbai, aimed at breaking away from all clichéd representations in Indian art.

Though widely considered one of India’s foremost abstractionists, Gaitonde was always quick to dismiss the title, referring to his work as ‘non-objective’ and affirming ‘there is no such thing as abstract art’. Gaitonde experimented with form and shape by creating large gradated surfaces with meticulously applied pigments, from which he would thereafter painstakingly remove areas with a palette knife. Given the laborious nature of his technique, he produced an extremely limited number of finished works. Influenced by ancient calligraphy and Zen philosophy, Gaitonde’s work has been recognized for its skill of being able to transform generic elements into ethereal platforms for spiritual introspection.

Gaitonde was famously private. He gave few interviews, wrote next to nothing about his art, and only produced five or six paintings a year. Very little is known about his personal life. Gaitonde isolated himself very early in his career from everything in his environment which he considered irrelevant to his intensity as a painter. Alongside art, he was an avid admirer of Indian and Western poetry, cinema, literature, theater, and classical music.

Gaitonde’s influence on other artists

The influence of Vasudeo S. Gaitonde’s abstract paintings on modern and contemporary Indian art is hard to overestimate. His minimalist landscapes, reminiscent in turns of Kandinski, Rothko and Malevich, were a bold departure in the history of Indian art. But he also exerted a direct influence as a teacher on many artists who would become important in their own right – artists like Nasreen Mohamedi, who refined Gaitonde’s minimalism to the sparest, cleanest gestures.

He was awarded first prize at the Young Asian Artits’ Exhibition in Tokyo in 1957. The American Abstract Expressionists made a significant impact on his artistic vision. In 1964 he was awarded a Rockefeller Foundation grant and spent several years in New York, where he was profoundly influenced by painters like Mark Rothko. He received the Padma Shri, one of India’s highest civilian honors in 1971, and a Kalidas Samman award in 1989–90.

Gaitonde’s paintings, often compared with those of many well-known Western artists, are widely exhibited. While he lived, his work appeared in solo shows in New Delhi, Mumbai and New York. Posthumously, his work has appeared in dozens of group shows around the world. His works are in permanent collection of Museum of Modern Art (New York), National Gallery of Modern Art (New Delhi), Glenbarra Art Museum (Himeji, Japan), and many more.

Gaitonde lived and worked in New Delhi, where he passed away in August 2001.