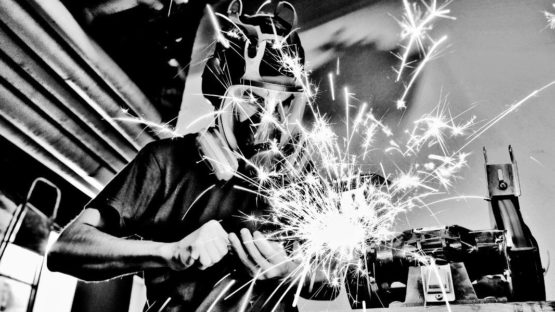 Vermibus is a Spanish contemporary artist who uses the public space as a channel to criticize, in an innovative way, the aesthetic value of the consumer society and its cruel dehumanization which takes away a person’s identity to replace it by the one of the brand. Vermibus collects advertising posters from the streets and use them in his studio as the base material for his work. Using solvent, he brushes away the faces and flesh of the models appearing in the posters as well as brand logos. Once the transformation is complete, he reintroduces the adverts back into their original context, hijacking the publicity, and its purpose.

Manipulation of the Image

The gesture of erasing the images with solvent is similar to the gesture of painting, but it is painting counter action. The process is the same, but it is not adding colors on a canvas to create an image, it is removing the colors of an existing photographic image to create a new image and new characters. By manipulating the image through removing the flesh of his subjects, Vermibus dehumanizes those figures that have already been made impersonal, but he is, in fact trying to find the aura of the individual, the personality that was lost. The posters and models are not so trivial anymore. People notice them, and stop to look at them. Vermibus’ modus operandi situates him out of the legal framework because it involves removing fashion and perfume posters from the advertising space in the public space in order to intervene in them. After that he returns them to their natural habitat where they do not usually remain too long because of the illegality of the action. Those spaces are censored in a short time thus destroying his works and becoming an area of consumption again.

Vermibus dehumanizes those figures that have already been made impersonal

Kate Moss is a world fashion icon, and therefore the perfect target for Vermibus, whose artworks and interventions challenge the fashion industry. Hidden within all the glossy advertisements surrounding each of us, are the processes of abuse and the senseless actuality of a materialistic paradigm. With Unmasking Kate, Vermibus reveals our mass consumption society down to nothing but the harsh truth: a cruel reality for the most iconic and influential model of the last decade, as well as for our society.

Dissolving Europe is the public art intervention series completed in 2013 by Vermibus. Using a hacked inter-rail ticket, he has been traveling Europe with an extensive set of billboard-lock keys, using them to illegally access print billboards and advertisement frames. Each site is carefully deliberated with its environment, from Rolex boutiques to archaic museums. Once opened, he uses various solvents and paints to alter the images, sometimes removing them entirely, and even cutting and pasting others. It is then replaced in another site, another city, another country.

Using a hacked inter-rail ticket, Vermibus has been traveling across Europe with an extensive set of billboard-lock keys, using them to illegally access print billboards

Unveiling Beauty is Vermibus’ most recent, ongoing project that started in 2015. It is the artist’s most ambitious series of works so far and it is also a collaborative project with the Open Walls Gallery located in Berlin. Unveiling Beauty is a series of public interventions which took place during the Fashion Week events in New York, London, Milan, and Paris. In this new work, Vermibus points out at common issues of the fashion industry and suggests, or perhaps reveals, what kind of beauty is hidden behind the make-up and the usual aesthetic standards dictated by various campaigns and advertisements. While traveling across the European capitals of fashion as well as consumption, Vermibus challenged the glamorous Fashion Week atmosphere with his powerful art that speaks against the terror of beauty campaigns.

Vermibus is a brave artist who gave a new meaning and a new form to transformations and transgression of public advertising spaces. He recovers a private space from consumption consumerism and transforms it into a cultural public space. Vermibus explores the dark aesthetics of dehumanized figures that were already depersonalized, as a way of initiating a powerful social critique against the advertising industry. Vermibus is continuously spreading his messages in the urban spaces throughout Europe, since the streets are the main battlefield of the war between the artist and various advertising corporations.