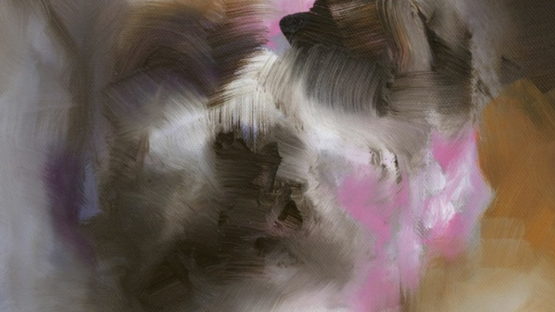 No matter how plainly dressed, there are a whole lot of accessories to each person in any type of social environments. Wearing a myriad of masks that avert attention to certain (un)existing qualities of the person, people have learned to portray a side of themselves that best suits a specific situation. Doing the same thing on a different level, Wolfgang Grinschgl goes face to face with the viewers and displays his many masks of personalities and emotions, never truly revealing himself. Developing his practice upon the image of oneself, Grinschgl explores the depths of character and fragmentation of identity.

The Austrian-born and based artist Wolfgang Grinschgl is a self-taught painter, and with a practice as complex on both technical and mental level, you wouldn’t hint towards him not being formally educated in the craft. Trained as a graphic designer prior to his painting, Grinschgl uses photography to capture the emotion and facial expression and moves it to the surface of the canvas. Believing that the medium of painting stores characteristic imperfections of artist’s humanity much better than a photograph would, he gets to approach his viewers much closer than he would by leaving his work behind a lens. Painting gives his pieces a certain significance and weight, and though many argue that the form of artistic expression is losing its momentum in contemporary times, Grinschgl believes the death of painting either never or always occurred, as he continues to paint.

In his use of painting, Wolfgang Grinschgl forms a practice that revolves around human interaction and the many different masks we use in order to portray a certain image of ourselves. Speaking to the viewer in his own way, Grinschgl dissolves identity into many various fragments, pulling them over a face in layers that constantly exist between the parties involved in this “visual conversation.” Seeing his face as a product of many different circumstances rather than a thing of his own, no one can really tell who exactly lies beneath the blurred layers of paint; quite possibly, even though the paintings are self-portraits, the viewer may find a different person hiding behind the mask.

Who We Really Are

Portraying the social phenomenon of identity deformation, the many faces of Wolfgang Grinschgl invoke an eerie feeling caused by an absence of a defined personality, yet a definite presence within the painting. Referring to the issue, Grinschgl believes we’re falling prey to our own traps, never being able to be our true selves after being defined with a certain mask. Whether or not the game is worthwhile, one could easily lose track of the various depictions of identity, alienating who we really are. Grinschgl’s paintings stunningly captivate the idea regardless of his lack of formal education in painting, leaving us searching for the truth behind the wall of masks.

The artist is represented by Lisabird Contemporary.