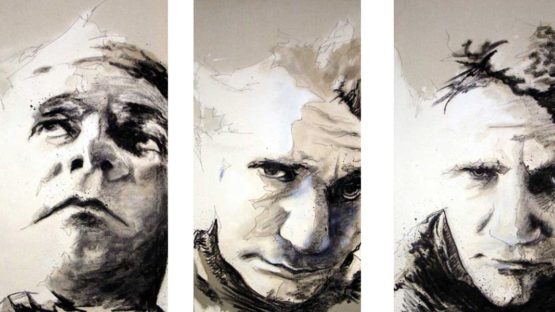 Wolfgang Krell is a German street artist who is painting mostly on canvas and walls, using a lot of different techniques. Krell works on large-scale surfaces with acrylic, spray cans, charcoal and brushes – his writer name is Cole TWS.

He was born in Dortmund, Germany. From 2001 to 2003 he has completed a further education for art teachers in the University of Applied Sciences in his home town.

Krell has his roots in the graffiti art. He produces his first pieces of art in 1983. Since those days he has explored the possibilities of the material spray paint and presented his works in many solo and group exhibitions.
In his latest work, he experimented with a mixture of stencils and spray paint, acrylic and pencil. To this day the spray can has remained a loyal companion since the beginning, but not his first choice of tools. Influenced by American graffiti in his first works in 1983 he oriented towards realistic painting in 2005. Weapons are a recurring theme in his painting. They are an integral part of his art and not as a representation of violence but rather as a metaphor and expression of rebellion with the purpose to provoke a reaction. Beyond a representation of violence, weapons express the color of rebellion in an intellectual game, a metaphor, a provocative revealing.

His credo is to tell stories or just move things into the right light. The stories Krell tells are mostly positive.  His dream is “to go around in a little space capsule and spray space satellites, space shuttles and other technologies of the outer space inventory”.
Wolfgang Krell lives and works in Dortmund.