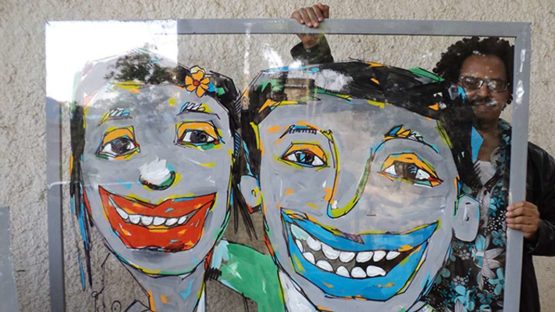 Contemporary Ethiopian artist Workneh Bezu always considered art both his passion and his dream. Throughout his career, the artist experimented with a variety of media and created numerous paintings, sculptures, graphics, and video works. Still, he’s best known as the pioneer of puppet and short animation film in Ethiopia. He’s widely known as a writer a director and a producer of the first children film in puppet film in Ethiopia, entitled Sasase fable ye sasase teret.

Growing Up at Addis Ababa

Workneh Bezu Kassa was born and raised in the capital of Ethiopia, Addis Ababa. The artist has shown interest in art since the early age, taking drawing lessons since elementary school before he enrolled himself at Addis Ababa University School of Fine Art and Design. There he studied from some of the finest masters of Ethiopian painting and sculpting while simultaneously developing his own style. The artist began his career by creating semi-figurative art pieces representing the human relationship with other living things like the sun, moon or the eye. This fascination resulted in a series of images with a circle as a predominant theme created with vivid brushstrokes and dark pigments that portrayed this powerful and energetic subject matter.

By establishing Habesha Art Studio, the artist set up an example for others to follow

Later on, the artist has shifted his attention from circles to female figures, particularly toward the emotional connection between mothers and children. The artist created an array of artworks that featured mothers and children that conveyed an array of human emotions such as sadness, happiness, frustrations and many more. Inspired by the famous saying “if you look after children, angels will look after you,“ the artist continued to create pieces featuring kids with oval faces and conspicuous eyes. Workneh Bezu’s latest artworks are inspired by Eve and the apple tree. In this series, the artist has reinterpreted the Biblical fable to conveyed the women bond with nature. In his pieces Eve and the tree are consumed by love and affection that results in mutual sharing.

The artist is the creator of the first puppet film in Ethiopia, entitled Sasase fable ye sasase teret. The film is named after two Ethiopian alphabets ‘sa’ and ‘sae’ that also compose the name of the film’s main character. The artist employed two different kinds of puppets – finger puppets and masked puppets to tell an array of traditional Ethiopian stories. He was one of the founding members of Habesha Art Studio with four other Ethiopian artists. The studio represents a platform where young and emerging art-makers from the country can present their body of work to the public. The creation of a venue run by artists served as an inspiration for many other creatives who followed Workneh’s path and established their own galleries similar to this art venue. Close contact with other creatives allowed him to further develop his artistic style and discover different ways of expression, forcing him to explore new techniques while constantly evaluating his work. His pieces were featured in numerous shows including Yes I can see exhibition at Talin culture institute and Addis Calling at Addis Fine Art, Addis Abeba.

The artist is represented by Create Hub Gallery.

He lives and works in Addis Ababa, Ethiopia.